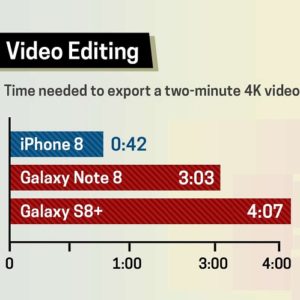 The day when the iPhone 8 and its oversized sibling, the iPhone 8 Plus have reached the Apple Store shelves, it’s been also confirmed that the 2017 iPhone flagships are the fastest smartphones, owning the best camera ever created on a smartphone. Earlier this week, Geekbench 4 confirmed, on its official website, that the A11 Bionic chip severely outperforms the A10 and all other Android competitors.

The Single Core scores have been more than twice as high when comparing the iPhone 8 & 8 Plus with the Samsung Galaxy S8 and S8+. The same huge discrepancy is encountered for the Multi-Core comparison the iPhone 8 Plus being the only smartphone that manages to go over the 10.000 points mark, while the iPhone 8 is only a few units below the 5-figure score. 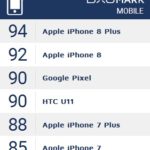 iPhone 8 Plus Tops DxOMark Rankings
Today, the renown DxOMark camera ratings have been updated with the reviews of the iPhone 8 Plus and iPhone 8 cameras. The results place Apple’s flagship at the top of the chart, ahead of the Google Pixel and HTC U11 devices, that previously managed to top last year’s iPhone 7 & iPhone 7 Plus lineup. The dual-camera iPhone 8 Plus scores 94 points, just 2 units higher than his smaller sibling. It seems that the sensor improvements and new features like Portrait Lightning gave the iPhone 8 line a strong enough bump to top the rankings! 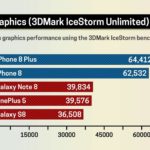 But that’s not all, according to tomsguide.com, Geekbench 4 isn’t the only benchmark that confirms the huge superiority of the A11 Bionic chip. According to the image uploaded nearby, the 3D Mark IceStorm Unlimited graphics benchmark shows a huge difference between the iPhone 8 Plus, iPhone 8 and the rest of the pack Galaxy Note 8, OnePlus 5 and Samsung Galaxy S8. The performance gab is obvious when the same 2 minute 4k video clip is exported and saved. The iPhone 8 managed to complete the task in an impressive time of 42 seconds while, while the Galaxy Note 8 needed 3 minutes and 3 seconds, while the Galaxy S8+ required 4 minutes and 7 seconds.

Tip: Grab Geekbench 4 and test your iPhone’s performance too! Share your results.