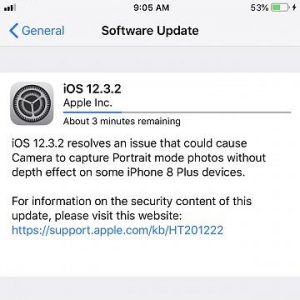 Apple has recently released another incremental update to the 12th iOS generation. It’s the second minor update, following iOS 12.3.1 that was issued only with bug fixes for the Messages app. So, did you notice that other users are running iOS 12.3.2, but the update doesn’t show up on your iPhone, iPad or iPod touch? Don’t worry, this update is limited to the iPhone 8 Plus, because it fixes a Portrait Mode bug that occurs only with this oversized model. This means that all other iOS 12 compatible iPhones, iPads and iPods won’t get the update.

iOS 12.3.1 remains the latest available software update. If you already run it on your iPhone there’s nothing else that you have to do. On the other side if you’re an iPhone 8 Plus owner you should be happy to update to iOS 12.3.2 and enjoy a flawless Portrait Mode experience. Apparently a bug was preventing your device from adding the depth effect when aiming to capture photos with the bokeh feature. All that you have to do is open the Settings app, and perform an usual over-the-air software update!

iOS 12.3.2 Full Update Log
The software update screen pinpoints the fix included in this release. Users are informed that iOS 12.3.2 “resolves an issue that could cause Camera to capture Portrait mode photos without depth effect on some iPhone 8 Plus devices.”

Fact: Do you know that the depth effect can be edited? This feature is available for 2018 iPhone flagship owners (XS, XR and XS Max) and is detailed here. It has been introduced along iOS 12.1.