Ready to play a simplistic, relaxing and entertaining iOS puzzle game? Now, it’s the perfect time for you to download Klocki on your iPhone or iPad. Maciej Targoni‘s, Rubik Cube-like tiles puzzle has just been selected as App Store’s free App of The Week, for the upcoming 7 days. Each tile contains the drawing of a line that is variously positioned on each block. Re-arrange tiles to form a single, continuous line that runs through the puzzle.

This game is so minimalistic that it doesn’t even provide any instructions about how to play. As soon as you open the app for the first time you’re prompted with the first level. Tiles are inter-changed with the help of taps. You can always switch two blocks at a time. The first tile that you tap will be replaced with the one that you select next. Move them around until you manage to build a continuous line that flows through all blocks, as exemplified in the .gif animation available nearby! 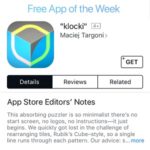 Download and Install Klocki
Tap the image nearby to open up the App Store and grab Klocki free of charge during the free App of the Week promo. If you see the GET button, it means that you made it in time. Else you have to pay “almost” $1 for it. Be aware that this puzzler runs on iOS 8.0 or newer and requires about 97.9 MB of storage space. This captivating iOS game can be played even when your device is in Airplane Mode. It’s rated 4.5 out of 5 stars and sums up around 100 levels of tile-matching.

Fact: Klocki is Maciej Targoni‘s second successful puzzler. His first one, Hook, prides itself with a flawless 5 out of 5 appreciation level from App Store reviewers.