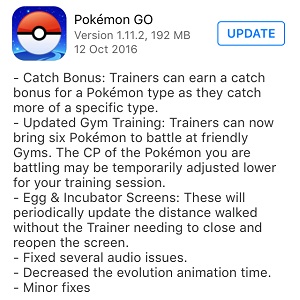 Pokemon GO is an iPhone and iPad game that certainly needs a few updates, but Niantic is currently failing to live up to the players expectations. Instead of giving us Pokemon on Apple Watch, a monster marketplace for trading your pray, or live head-to-head battles between Trainers and their fantasy creatures, the San Francisco based software development country is feeding us with below par updates.

Pokemon GO for iOS has just reached version 1.11.2 and adds features like Catch Bonus, improves Gym Training options, and introduces automatic value updates for the distance walked to hatch an egg, with the help of an Incubator. Other changes are aimed to speed up the gameplay by shortening Evolution animations and improving user experience by fixing audio issues.

Download & Install Pokemon GO 1.11.2
If you’re convinced by the above mentioned novelties go ahead and upgrade to the latest Pokemon GO version, available in the App Store. Tap here and you’ll be instantly redirected to the official download page. Do the same if you don’t have Pokemon GO installed on your device yet and want to give it a try.
Fact: This upgrade package is almost 200 MB large and was seeded on October 12, 2016. 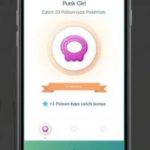 – Catch Bonus: is surly the most important upgrade of this version. It’s a new system that increases you the chances of catching a specific Pokemon type based on your history with each type. You earn medals for catching 10, 50 and 200 creatures from the same type. Depending on your medal, the chances of catching a similar type of Pokemon are powered up. It’s believed that the increase is layered into 10%, 20% and 30% for bronze, silver and gold medals.
Important: Pokemon type should not be confused with species. Types includes: normal, fighting, flying, ground, rock and so on, while species are: Pidgey, Bulbasaur, Pikachu and all the others. Pokemon types can include multiple species!

– Updated Gym Training: Trainers can now field 6 Pokemon in training battles instead of 4. This allows players to train their roster more efficiently.
– Egg & Incubator Screens: Auto Updating (Until now, Trainers had to close and re-open the Eggs screen in order to refresh the walked values, that show how far away an egg is from hatching. The tracker now periodically updates to keep you posted and encourage you to walk the remaining distance faster to hatch Pokemon eggs faster.

– Audio Issues: Fixed.
– Evolution Animation Time: Decreased. (This doesn’t mean that Evolution has become easier. The actual animation time that shows Pidgey growing into a Pidgeotto and then into a Pidgeot is shorter, allowing Trainers to focus on other important things).
– Minor fixes (A classic!)