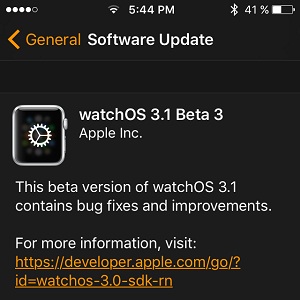 Along with the iOS 10.1 Beta 3 release, Apple has also seeded the third test version of the upcoming watchOS 3.1 firmware update. As with the case of the iPhone’s OS, the newest Apple Watch software beta doesn’t bring any new features or changes. We’re already quite deep in the beta testing timeline and the next betas will only focus on minor bug fixes and improvements.

This means that we’re close as it can get from the public release version and Apple will only test the version’s reliability and patch any bugs that surface during testing. So, if you haven’t tested watchOS 3.1 so far, you can start considering it now. However, do mind that you need the iOS 10 beta profile, on the paired iPhone, in order to be able to download it. That’s because Apple hasn’t issued public watchOS betas yet. 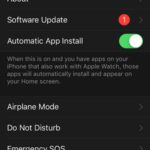 Important: Be aware that there is no way to downgrade, at least not on your own, once you decide to grab watchOS 3.1. You have to bring your wearable to the Genius Bar and ask for assistance to get it done.
A. If you already switched to iOS 10.1 on you iPhone, it’s very easy to grab watchOS 3.1. Open the Apple Watch app and browse the My Watch tab. Go for General -> Software Update and allow your iPhone to search for the beta. Once it’s detected tap Install and the update is installed over-the-air.
B. Else, you have to grab iOS 10.1 on the paired iPhone first and then proceed with the actions described above. To download iOS 10.1 public beta open the Apple Beta Software Program, sign in or sign up and download the iOS 10 beta profile.

Install Tips: Whenever you install a new update on your smartwatch make sure that the wearable is in range and connected to the paired iPhone. The Watch should also be charged to at least 50% and plugged into a power source.