Telepaint Is The Free App Of Week 25 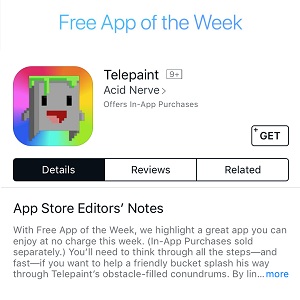 Telepaint Free app of the Week 25.

Apple has just announced the featured app the has gone free this week. Telepaint, developed by Acid Nerve, is available cost free for the upcoming 7 days. This App Store app usually retails for $2.99 and this is the first time when it goes on sale, ever since its launch recorded on March 19, 2016. Telepaint is an interesting puzzle game that requires the player to carefully plan its taps in order to direct a walking bucket of paint towards the required destination.

A total of 140 levels are waiting to sharpen your mind. Carefully plan how you teleport the walking bucket in order to unlock obstacles and reach your final destination. The current version, labeled 1.2, has been freshly seeded by the developer and includes 40 additional levels, along with two new worlds with unique game mechanics. The app doesn’t sell in-app purchases, which means that you can enjoy it fully free for of charge. Download it now from the App Store!

Install Telepaint on iPhone or iPad 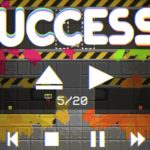 Tap the nearby image to open the official App Store download page. The app compatible with both iPhone, iPad and iPod touch models that are able to run iOS 9.1 or later. It requires 113 MB of storage space and is a Rated 9+. iOS fans rate it as a 4 out of 5 stars application.

Tip: Play this game with the audio on, because all actions are synced with the beat, providing a nice rhythmic experience.

Hint: Do you know that the App Store will receive a complete redesign in iOS 11. Check out a preview and discover new featured sections like App of the Week and Game of the Week. We’re not sure yet if the Free App of the Week sale will continue after the release of iOS 11, scheduled for this fall. In the meantime take advantage of these sales and many more others features in our App Store Deals section.