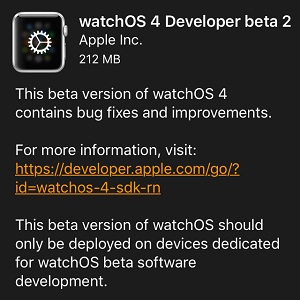 The second test version of the upcoming watchOS 4 Apple Watch operating system has been also rolled out by the Cupertino-located tech giant, along with the iOS 11 Developer beta 2. Similar to the iPhones and iPads, the Apple Watches running watchOS 4 beta 2 receive bug fixes and performance improvements. At the time of writing no new features or changes have been detected. Update: Toy Story Watch Face now available in Beta 2.

However the smartwatch does run a bit smoother, acts more stable and battery usage seems less aggressive. Differently from the iOS 11 beta testing programe, watchOS 4 won’t receive a publicly downloadable test version. The public release is scheduled for this fall. Nevertheless, anyone can grab the watchOS 4 Developer beta even without owning an Apple Developer account. We’ve already provided a step-by-step guide for this workaround available here.

watchOS 4 Developer Beta 2 Download
Important: Reverting from watchOS 4 Beta to a public watchOS version is complicated. This is why you should think twice before installing and be aware that you have to stick with the beta until the public watchOS 4 version is rolled out this fall. 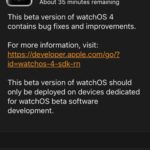 watchOS 4 Developer Beta 2 Update Log
According to the Software Update prompt this 2nd test version brings bugs fixes and performance improvements along the already reviewed new features and changes that have been included in the initial beta:
– New stock Apple Watch Flashlight available in the Control Center.
– Enhanced Dock with vertical scrolling function, app display settings and All Apps button.
– List view option as an alternative for the app bundle honeycomb.
– three new Watch Faces: Siri, Kaleidoscope and Toy Story.
– News app imported from iOS coming along with a new News complication.
– Apple Pay person-to-person within Messages and Apple Pay Cash, identical features with the ones provided by iOS 11 for iPhone and iPad.
– Multiple enhancements for the Workout app.