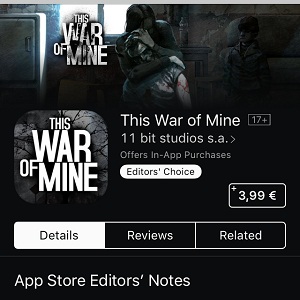 This War of Mine for iOS

One of the most exciting games that I’ve played so far, on my iPhone, is called This War Of Mine. It’s highly interesting because it presents war from a different perspective. You’re not an elite soldier anymore that is encouraged to kill and conquer for glory, but instead, get the chance to experience the war from the toughest perspective possible, that of a civilian. To perform in this game you have to survive the dangers and horrors of war which include: lack of food, medicine, snipers and other hostile forces involved in this type of confrontations.

The app is currently hugely discounted from $14.99 to $3.99 but this shouldn’t be the only reason for you to grab it from the App Store. With the real-life political context of our days that sees numerous refugees fleeing their countries because of war, most of us should test out this game and experience just of fraction of what’s actually happening in some parts of the world. The game is addictive but rough in the same time. That’s also confirmed by the 17+ rating, which prohibits children from playing it. 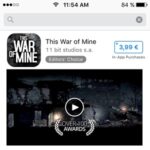 Download This War Of Mine At Discounted Price
The current sale advertised in this article is available for a limited time only! Grab This War of Mine from the App Store and install it on your iPhone or iPad. The app is 428 MB large and runs on every iPhone or iPad that is powered by iOS 8 or later.
Be aware that the game is optimized for all devices but you will experience lower frame rates in case you play it on an iPhone 4S or iPad 2.
Fact: This War of Mine is played in landscape mode on both iPhone and iPad!

This War Of Mine Gameplay 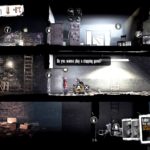 Day and night cycle. During daytime you need to stay undercover in your refuge to avoid snipers. Use this time to manage your survivors, trade resources and prepare for your night incursions. During dark time you can move without being a moving target. You’re allowed to take a civilian with you to complete various missions that bring items which will help you to survive.
Build weapons, beds and even stoves in order to help your civilians stay alive.
The war zone and characters are randomized every time when you start a new game.
Fact: The game’s playing scenario is inspired by real-life events!

The Little Ones Expansion
The developer, 11 bit studios, has also included an add-on that brings drama to a whole new level. Children are included among the refugees if you grab The Little Ones expansion, available under the form of an in-app purchase. Besides protecting adults and their kids from the shortcomings of war you also have to focus on entertaining the little ones during these horrible times because children are still children no matter if its war or peacetime.