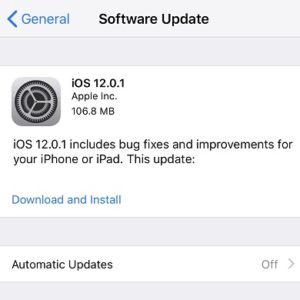 As expected, Apple has released iOS 12.0.1, a minor software update that addresses some of the most important bugs that surfaced after the iOS 12 public release. Perhaps the most, annoying bug prevented the new iPhone XS and iPhone XS Max devices to immediately charge when plugged in with the screen turned off. Users had to unplug and reconnect the Lightning cable to make sure that the device is actually charging!

This issue also known as the iPhone ChargeGate, was reported on several other iPhone models. However, it proved to be a bug only for the 2018 iPhone lineup, as the majority of other cases have been caused by the new USB Accessories restriction available in the Settings app, which prevents the iOS device to connect via USB when the iPhone is locked. You can read more about this here.

5 iOS 12.0.1 Full Fixes
Here are the five bug fixes and improvements mentioned by Apple in the iOS 12.0.1 update log. 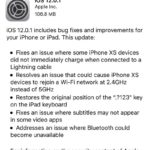 1. ChargeGate Fix: As mentioned above Apple addresses the iPhone XS and iPhone XS Max charging issues when connected to a Lightning cable.
2. iPhone XS Wi-Fi Patch: Have you been disappointed by the WiFi Internet speed of the 2018 iPhone lineup? Apparently this was caused by a bug that caused the iPhone XS and its oversized sibling to rejoin a Wi-Fi network at 2.4GHz instead of the faster 5GHz.
3. Video Subtitles Fix: iOS 12 caused some video apps not to properly display subtitles. This has been solved!
4. Bluetooth Solution: Apple claims that it addressed the bug that made Bluetooth unavailable for third party accessories like speakers or other receptors.
5. iPad “.?123” key Fix: This important key has been switched in iOS 12 on all compatible iPads. Switching to the keyboard’s numbers and symbols screen becomes familiar again as the key returns to its original position.

How To Upgrade To iOS 12.0.1
To grab the latest iOS version, open the Settings app and browse for the General -> Software Update screen. Tap on Download and Install, provide your Passcode, Agree with the terms and the around 100 MB large update will be deployed on your compatible iPhone or iPad, as usual.
Fact: If the Automatic Updates feature is active, your device will probably self update overnight, if you agree with it and the device is charged and connected to a Wi-Fi network!