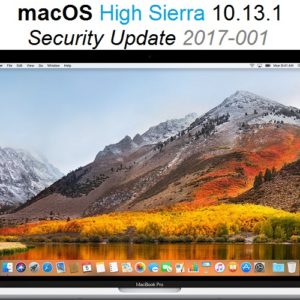 Less than a day since the major macOS High Sierra root superuser bug has been detected and tweeted by Lemi Orhan, Apple has issued a Security Update labeled 2017-001 which patches this macOS vulnerability and secures Mac from unauthorized third party access. We’ve already shown you yesterday, how to temporarily fix the glitch and now if you install this security update the problem will be permanently fixed.

Security update 2017-001 is available in the Mac App Store, but Apple confirms that even if you don’t install it manually, it will be automatically deployed on all Macs running macOS High Sierra 10.13.1, by the end of the day. It’s worth highlighting that, as reported yesterday, macOS Sierra and any other previous versions haven’t been exposed to this security bug.

Tip: After you install the update, you might want to convince yourself that the patch is truly working. Here is how you can replicate the root superuser bug and check that your Mac in now secured!

Update: It seems that in some cases, file sharing fails to work after securing the Mac with the above mentioned firmware patch. Below, you can find out what to do to in order to fix the issue:
How To Repair File Sharing After Security Update
1. Open the Applications folder, browse for Utilities and access the Terminal app.
2. Input the following code: sudo /usr/libexec/configureLocalKDC and press Return.
3. Type your administrator password and press Return, one more time.
4. Exit the Terminal app and file sharing should be back online.

Fact: The above fix is provided by Apple in this support document.