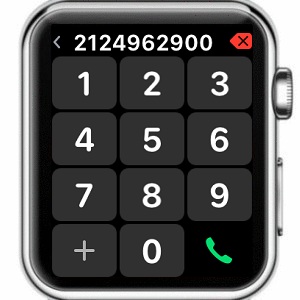 If you’re an Apple Watch user you were probably annoyed by the fact that dialing a call from the wrist-worn device was only possible if you planned to reach a contact that was already saved on the paired iPhone, or a number that you have been previously in contact with. There was no option of actually dialing an unknown number, because no dialpad was available. However, this changes in watchOS 4 as the 4th Apple Watch OS generation now includes a Keypad in the stock Phone app.

This means that you don’t need to pull out your iPhone in case you want to dial a number that you just received offline and which isn’t saved in your iOS contacts lists. Simply, raise your wrist, perform a button press, a couple of taps and dial any number that you need to reach out to. watchOS 4 is currently tested by Apple Developers and by Apple Watch enthusiasts that have installed the Beta version. It will be officially released in September along iOS 11 and the 10th anniversary iPhone models.

How To Dial On Apple Watch
1. Raise your wrist to wake your watchOS device!
2. Press the Digital Crown to bring up the honeycomb app bundle, which by the way can be also set to display as an alphabetical List View, to better localize apps.
3. Tap on the Phone app.
4. Next, tap on Keypad, available just below the Contacts tab.
5. Input the required phone number and tap on the green Dial pad to initiate the call.