iOS 10.0.2 Fixes Bugs And Improves Stability Of iPhones And iPads 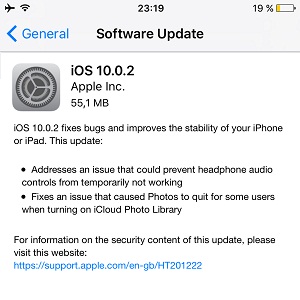 The fact that iOS 10.1 is in its early beta stages, hasn’t stopped Apple to release iOS 10.0.2, only 10 days after the public launch of the 10th iOS generation. This small update comes with bug fixes and a few patches that improve the stability of the operating system. It promises to solve unresponsive headphone controls, manages Photos app instability and fixes missing app extensions.
Update: It doesn’t seem to solve the iPhone 7 No Service error.

The update is available and working without any problems over-the-air. Remember, that iOS 10 created some waves when it bricked some iPhones, because of a bug that prevented the smartphone from properly updating OTA. The problem was solved with the help of iTunes and Apple eventually edited the download package. So, open Settings, go to General -> Software Update and tap on Download and Install after the iOS 10.0.2 update package is detected!

iOS 10.0.2 Release Note
The new firmware is between 50 – 90 MB large, depending on the iPhone model you own. According to Apple the first Software Update coming after the release of iOS 10 includes bug fixes and stability improvements which include:
– Headphone audio controls that, in some cases, have experienced On and Off working patterns are now functioning normally.
– In some cases Photos app would shut down if the user would turn on iCloud Photo Library. This has been fixed.
– A glitch that prevented some app extensions from being enabled has been addressed. (It seems that this issue is model specific, because not all iPhone versions have it mentioned in the update log!)

Fact: It seems that Apple has started sharing device specific release notes. Below are two different versions for the iPhone 5S and iPhone 6 models. 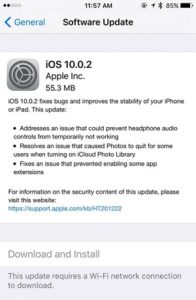 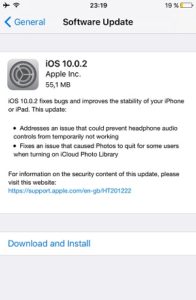 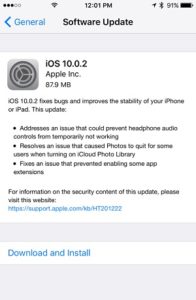