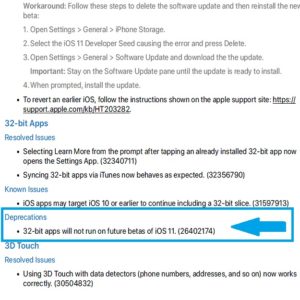 6 days before before the iPhone 8 keynote, iOS 11 receives its 10th Developer Beta version and 9th Public Beta iteration. Both test editions are one and the same and can be downloaded now over-the-air. The only difference is that the Developers’ one is aimed for coders registered with Apple and is released 1 hour prior the public test version, which is open to everyone that volunteers to contribute to the debugging of the 11th iOS generation.

As expected, there are no new features revealed in Beta 10, when compared to the previous test versions. It focuses instead, on bug fixes and performance improvements. Apple also notes, in the iOS 11 Beta 10 release notes, that this is the last version supporting 32-bit apps! As you might already know, iOS 11 will only allow 64-bit apps to run on your iPhone and iPad. If you haven’t checked already here is how to know if you have any outdated apps currently running on your iOS device. 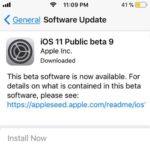 How To Download iOS 11 Beta 10
If you already run an iOS 11 beta version just open the Settings app and tap on General -> Software Update. Depending on what Beta Profile you have installed your iOS device will find the Dev Beta 10 or Public Beta 9. As mentioned above, their the same so don’t worry. Continue with the regular OTA update procedure, by tapping Download and Install and allow your iPhone to do the job.
If you’re now to iOS beta testing and want to try to run a beta for the first time, the best bet is to signup to the public Beta program and install Beta 10 as explained here.

iOS 11 Beta 10 New Features
Control Center – Tapping the Wi-Fi button in Control Center now disconnects from the current network and also temporarily disables Wi-Fi networking.
Keyboards – A new Arabic keyboard for the Nadji Dialect has been added.
Safari – New sync system in Safari for Bookmarks and Reading List for better syncing and improved security. Migration will occur silently as all devices signed into iCloud update to iOS 11.
Siri – New voice additions for: both genders of Brazilian Portuguese, Canadian French, Dutch, and
Swedish; female voices for English and Mexican Spanish.
– Voice upgrade for both genders of Japanese and Chinese.
– Support for translation requests from English US to Chinese, Spanish, German,
French, and Italian.