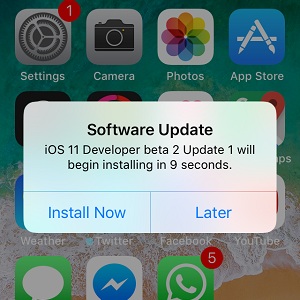 Apple has just seeded a rare update for the iOS 11 Developer Beta 2, 5 days after the initial release of this 2nd iOS 11 test version, aimed for Developers. The 11th iPhone and iPad Operating System generation is expected to become publicly available this fall along with the launch of the 2017 iPhone models. In the meantime, the Cupertino-based programmers are periodically releasing test version to fine tune iOS 11 and allow app developers to update and create new applications that meet the guidelines of the upcoming release.

iOS 11 Developer Beta 2 Update 1 is however a very rare roll-out. Apple is practically updating a beta version that was already seeded. The main explanation for this strange update is that the iOS 11 Public Beta is about to be released too and the Developer Beta 2 had some glitches that prevented it from being seeded to public testers that volunteer to help Apple with the debugging of the upcoming OS. The flaw in question is that downgrading from iOS 11 Developer Beta 2 to iOS 10.3.3 beta was not possible directly, testers had to downgrade to iOS 11 dev beta 1 first and then downgrade one more time to iOS 10.3.3 beta. 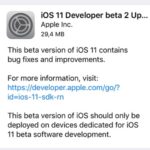 – This software update is advertised as containing bug fixes and performance improvements.
– It’s a small size upgrade package, around 30 MB.
– All iPhones and iPads running iOS 11 Beta 1 or 2 are able to download it over-the-air from Settings -> General -> Software Update.
– The update comes with a higher build version, 15A5304j for Beta 2 Update 1 compared to 15A5304i of Developer Beta 2.

Hint: Update 1 might not be available on all iPhone models. This is another indicator that it fixes particular performance issues. Our tests conclude that it’s targeting older iPhone models including the 5S and 6 terminals.

Tip: If you aren’t an Apple Developer and want to test out iOS 11 before the public beta release here is how to download and install the Developer beta!