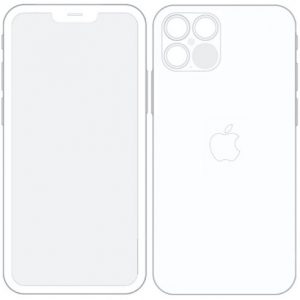 Another day, another leak when it comes to the upcoming 2020 iPhone flagships. Same Apple-leaker, Fudge, posted on Twitter, allegedly two more leaked images that depict a smaller notch at the top of the iPhone 12 display. This leak is also accompanied by yesterday’s sketch that shows the iPhone 12 Pro triple-lens Camera module together with a 4th item, the anticipated LiDAR scanner that will allow your iOS device to map the environment better and quicker than ever.

The same leaker, @choco_bit, has also twitted an alleged schematic of the iOS 14 Home Screen layout that includes squared icons as well as larger blocks. This hints to a mixture of traditional app icons an new introduced widgets. If true, this would be a major change for the iOS interface.
The nearby image depicts though an iOS 14 concept with widgets and app icons on the Home Screen, created by Parker Ortolani.
Fact: This leak will be confirmed or not as soon as the start of June. Apple will preview and release a Beta test version of iOS 14 during the WWDC 2020 keynote.

What do you think about these latest leaks? Do you plan to upgrade to the iPhone 12 series? Let us know in the comment section available below.

Related: iOS 14 is expected to introduce the CarKey feature and allow users to unlock their car with an iPhone!