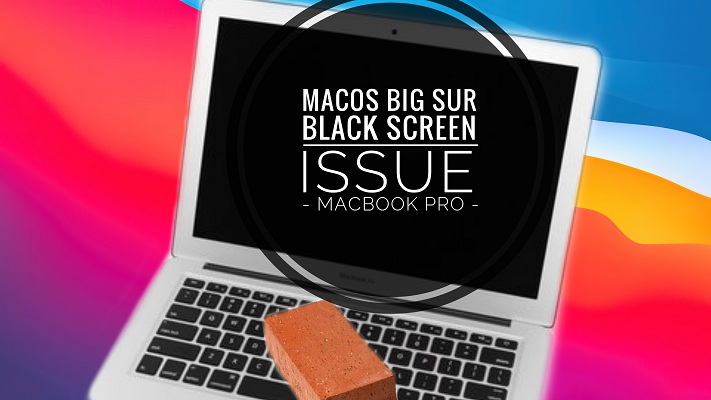 If you’re owning an older MacBook Pro model and plan to upgrade to the recently released macOS Big Sur update, don’t do it! There is a good chance that macOS 11.0.1 will brick your computer! We’ve just been mailed about this and reports surfacing online from users complaining that their Macs get stuck during the macOS Big Sur update process. The computers freeze and displays a black screen!

One of the things that all reports have in common is that the affected devices are old MacBook Pro models including late 2013 and mid 2014 13-inch MacBook Pro units. Coincidence or not, these are the oldest devices that are compatible with macOS Big Sur!

Update (November 19) – Apple has released a revised version of macOS 11.0.1 Big Sur that might focus on the installer bug reported in this article. Although we don’t have a confirmation yet, please proceed with caution if you decide to install macOS Big Sur on your 2013 and 2014 MacBook Pro machines!

Unfortunately, at the time of writing, although reports are numerous, there is no easy fix for this problem. This is why we suggest you to think twice before attempting to upgrade an old Mac to macOS 11.0.1!
Troubleshooting tips like NVRAM, SMC, Safe Mode and Internet Recovery (alt+cmd+R) key reset combinations aren’t working, once the issue flares up!
Users with devices stuck displaying the black screen of death during the macOS Big Sur update don’t seem to have any viable workaround to bypass this error.
Apple has been informed by this problem and the official recommendation is to bring the computer to book and Apple Store repair and have the device serviced!

How to disconnect I/O board from logic board. | Source: iFixit (Step 18)

Apparently, some users have been able to un-brick their MacBook Pro’s plagued by black screen of death, by physically unplugging the I/O board. Yes, this is some advanced troubleshooting that requires you to partially teardown your Mac. More, it doesn’t guarantee a fix!
It seems that macOS Big Sur update has the potential to damage the I/O boards of older MacBook Pro models!
Depending on the stage where the update process bricks your machine, you can get away with disconnecting the I/O board from the logic board and restarting the computer. Your Mac is able to boot without the I/O board and the macOS Big Sur update resumes. You can reconnect your I/O board as soon as the update process ends!
However, in the worst case scenario your Mac could need an I/O board replacement. Although a pro-user could replace it at home, as Reddit user diegor explains, we strongly recommend you to bring your computer in for an official repair!

Update (November 19) – Apple acknowledges the macOS Big Sur installation problems on older 2013 and 2014 MacBook Pro computers and has issued a new support document with info about how to attempt to troubleshoot it. The tips include workarounds already provided in this article:

Most likely Apple will have to issue a software update with a fix that will prevent old Macbook Pro’s from bricking while updating to macOS Big Sur. Until an official fix is confirmed we recommend you to refrain from updating.

If you already did it and have bricked your Mac, bookmark this page as we are actively searching for a fix and will update this article as soon as a solution becomes available! Alternatively, you should book an appointment to an authorized Apple repair shop.

More: Some newer MacBook Pro models, that come with a Touch Bar, are also experiencing a macOS Big Sur bug, that prevents the digital control panel from properly displaying. Here are a few ways to fix it!

If you find a way to fix the macOS Big Sur black screen bug, don’t hesitate to use the comments section and share it with us. Have other questions? Don’t hesitate to ask for help!

Related: Are you trying to update to macOS Big Sur but your prompted with the not enough free storage error? Here are a couple of tricks that will help you free up space on your Mac!