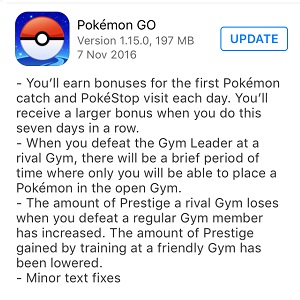 Niantic has just released version 1.15.0 for Pokemon GO, more than two weeks after adding colors to incubating eggs. This is an update that focuses on encouraging Trainers to hunt daily, by helping them out to gain XP quicker and progress towards the higher levels of the game. The Gym defending and conquering system has also been tweaked a little making it easier to conquer rival camps and more difficult to strengthen a Gym once conquered. Pokemon GO now also does justice to Trainers that defeat a Gym Leader, offering them the limited time opportunity, to place a monster in the vacant Gym.

We’re still waiting for Niantic to bring Pokemon GO on Apple Watch, as promised. Certainly the game would be revived by the ability to trade monsters between trainers in a virtual Pokemon GO marketplace. But until then we have to settle with these minor updates and perhaps a few more in-game events similar to the successful Halloween edition. 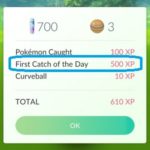 Pokemon GO 1.15.0 New Features Explained
Niantic’s update log describes three additions to the blockbuster augmented reality game. Let’s check them out:
1. Daily Catch Bonuses
To encourage you to hunt daily, Pokemon GO now awards 500 additional XP for the first virtual creature catch of the day. If you’re loyal to the game and hunt for 7 days in a row you get 2000 more XP on the 7th day. Along with Experience Points, stardust is also awarded. 600 units for the first catch daily and 2400 on the 7th day. 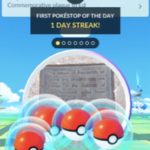 2. Daily PokeStop Bonuses
Further XP can also be gained by checking PokeStops. Your first visit of the day brings 500 XP as well as additional items. Spin them daily and on the 7th anniversary you get 2000 XP.
Tip: You can grab two first catch of the day bonuses by catching a Pokemon or spinning a PokeStop at 11:55pm and repeating the same process ten minutes later at 00:05am. A new day begins at midnight of your local timezone! 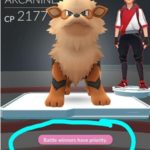 3. Prioritized Pokemon Gym Placement
Defeating a Gym Leader now brings a well deserved benefit. Besides conquering the Gym for your own team you get a limited time opportunity of placing a Pokemon from your own roster in the open Gym. This hinders the Gym snitching trick that would allow a player from the same team as yours, to place one of his own Pokemon in the open Gym, even if he did not send a single blow to the Prestige of the Gym. Fellow Trainers can’t occupy the vacant Pokemon spot anymore if they don’t actively participate in the battle and are the ones that send the final blow and conquer the battlegrounds.

4. Gym Prestige Decrease & Increase Changes
Niantic wants to make the virtual Pokemon world more dynamic and thus makes Gyms more vulnerable. From now on, defeating a regular Gym member brings additional damage to the Prestige of the Gym. While defending a Gym is harder because Prestige is gained harder when training a monster at a friendly Gym. It’s unknown yet how much the algorithms have changed but this surly makes the game more unpredictable, thus more exciting to play.

Fact: This latest software update is 197 MB large. Grab it now from this official App Store download link, no matter if you’re a first time user or a devoted Trainer that wants to install the latest features!