The iOS Mute Notifications For A Conversation Feature 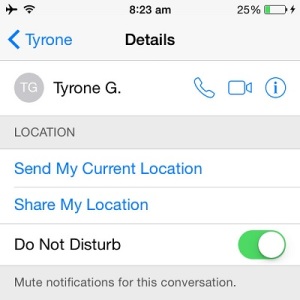 iOS Mute Notifications for a Conversation.

Every now an then you engage in a group conversation or have text exchanges that sometimes get overwhelming and can distract you too much, from your work and other important daily routines. iOS 8 comes with a great new feature, that allows you to completely deactivate notifications. This way you can control for which chat session you wish to be alerted and what incoming texts won’t disturb you.

If you’re part of an active group discussion, that you usually check only in the evening, you can Mute it and you won’t receive notifications when new messages are received. Your iPhone will still receive the texts, but iOS won’t display any banner or lock screen notifications. It will also totally silence any kind audio alerts. 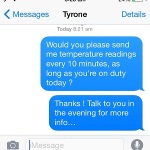 How To Mute Text Notifications
First please decide upon the conversation that you don’t wish to receive anymore notifications for. Do mind, that this is a reversible decision, so don’t be hesitant.
Next, open the thread in question and tap on Details. A menu with settings for the actual chat session appears. The last feature is called Do Not Disturb.
Turn it on and all alerts are muted, until you return to this screen and deactivate the silencing feature.

If you’re active in many conversations and decide to mute a series of them, you risk to forget which chats are silenced and which not. When you decide to edit them, you can distinguish with the help of the small Do Not Disturb icon, placed next to the conversation in the Messages app list. You can notice it in the print-screen attached nearby. It’s the same symbol that iOS displays in the Control Center. There it’s used for enabling the Do Not Disturb mode for all your iPhone’s or iPad’s notifications. 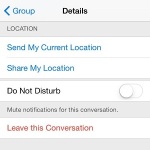 There are also cases when you are active, for a while, in an iOS group message conversation, but at some point the subject becomes obsolete and you wish to stop receiving texts, from that specific group. Apple have introduced the Leave this Conversation feature. It’s available below the Do Not Disturb setting. However, after several tests, it seems that the feature becomes available only if all members of the group are running iOS 8 on their devices. Else, the Leave this Conversation feature isn’t displayed. This lack should be corrected in further iOS updates.

If you wish you can also completely block a contact or number from being able to message you. But that initiates a total block, calls included!