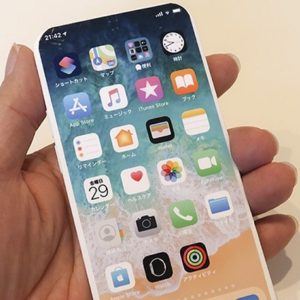 The iPhone 12 is still months away from the public release but we’re already getting more and more leaks and rumors about the expected 2021 iPhone lineup, the alleged iPhone 13. An early and rugged 3D printed iPhone mockup has been published by Japanese site Mac Otakara, which has a good trust score when it comes to Apple rumors. The model is most likely built based on leaked specifications and rumors. The sites quotes “Alibaba sources”, a Chinese e-commerce platform.

The showcased model is a 5.5″ iPhone 13 prototype, which should be the continuation of this year’s rumored low-end 5.4″ display iPhone 12. Apple plans to release four iPhone models in 2020, two higher-end Pro models and two lower-end devices in the range of the iPhone XR and iPhone 11, in two different sizes, 5.4″ and 6.1″. The most important change is the rumored notch-free design of the 2021 iPhone flagships.

iPhone 13 Most Important Features
1. Notch-Free Design
Apple is most likely expected to place the FaceTime camera under the display with the help of Samsung’s Under Panel Sensor technology. This could lead to the first notchless iPhone since the edge-to-edge display has been introduced. Thinner bezels are also expected! 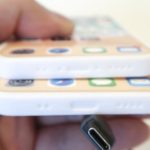 2. USB-C or Port-Less
It’s not clear yet if Apple will opt to equip the 2021 iPhone models with an USB-C type port (replacing the Lightning connector) or will attempt to bring things to the extreme and release the first iPhone without ports to create a truly wireless iPhone. The 3D mockup shared in this article goes with the rumor of an iPhone 13 equipped with an USB type C port.
3. Main Camera Module
As seen in the Mac Otakara mockup the main camera isn’t configured yet. We can notice dots that suggest that there is still work in progress. However, a leak that we covered a couple of weeks ago, provided by Fudge, depicts an iPhone 13 with a quadruple-lens camera module accompanied by a LiDAR sensor!

Important: Mac Otakara’s mockup presents a prototype that’s still under development. For sure Apple has still enough time to change its mind and thus end up with a different iPhone 13 design. They company will surly also analyze the impact of the upcoming iPhone 12 before taking a final decision about the 2021 iPhone lineup.

Do you plan to upgrade this year or wait for the iPhone 13? Let us know in the comments section available below.

Related: The good news is that the iPhone 12 Pro expected to get a base storage bump to 128 GB. The bad one is that it could be the first iPhone ever shipped without the wired earpods.