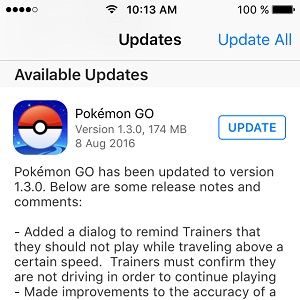 Niantic has just released another update for the phenomenon app of the moment. Pokemon GO for iOS reaches version 1.3.0, directly jumping from firmware 1.1.0. Letting numbers aside, the good news is that it brings back the much asked Battery Saver option, that was removed, because of malfunctioning, during the previous update.

One other feature that was removed with the same 1.1.0 update, the Nearby Pokemon radar, isn’t back yet, although Niantic confirms that it currently tests the feature on a small margin of players before deciding to include it back to the general public. Let’s hope that they get their footprints back as soon as possible. However, you can still track Pokemon available around you, by monitoring their position fluctuation in the Nearby list. Until then here is everything that has changed in Pokemon GO 1.3.0. 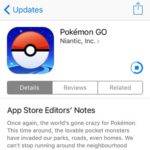 The new firmware is available in the App Store. Open the app and tap on the Updates tab available in the bottom menu. Your iPhone will display all updates currently available. Scroll until you find the Pokemon GO label. Next, tap on Update and wait until the new version is installed on your iOS device. That’s it you’re now ready to run Pokemon Go 1.3.0.
Tip: The update package is 174 MB big. If your Mobile Data plan isn’t too generous, make sure that you’re on a Wi-Fi connection before you hit that Update button.
Fact: If you haven’t downloaded the game yet you can install Pokemon GO now! 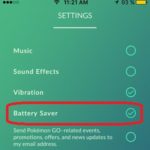 1. Battery Saver
You can find the feature in the exact same location as it was before Niantic removed it. Open the Pokemon GO Setting page, by tapping the PokeBall-like button available at the bottom of the Map. Hit the round circle next to the Battery Saver label to tick it back ON. Keep Vibration on too and save iPhone battery as explained here.
2. New Speed Limit Dialog
The app is now able to inform you if you brake the speed limit. In case the warning is triggered you have to confirm that you aren’t driving to continue playing. Many Trainers are trying to trick the Pokemon GO servers and gain mileage to hatch eggs faster by driving just below 25km/h, that’s 15.5mph.
3. Curveball Throw Accuracy
Throwing Balls with spin generates an angled trajectory that awards you 10 extra XP. However, until now it was extremely difficult to aim properly with a curveball throw. Niantic promise to have solved this glitch.
4. Bonus XP For Throws
One other bug prevented the Nice, Great and Excellent type of ball throws from being recognized and awarded with the appropriate XP rewards (10, 50, 100). This one is also fixed now.
5. Medal Icons
Certain achievements were displaying wrong medal icons. According to Niantic, this has been also fixes. 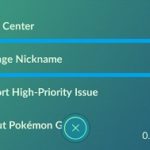 6. Change Nickname
This is a big one! Trainers now have the option of changing the Avatar nickname a single time. If you were less inspired when picking your code name when starting the game, you have a one-time chance to fix it!
7. Team Leaders Visuals
The leaders of the Red, Blue and Yellow teams: Candela, Blanche and Spark have received graphics updates.
8. Nearby Pokemon Tests
The radar for Pokemon available to spawn in your vicinity is currently tested on a small amount of Trainers. Niantic promises to bring it back to the general public in a future update. The Nearby Pokemon radar is crucial for the advanced stages of the game when Trainers hunt and catch species that aren’t registered to their PokeDex.
9. Text Fixes
Last but not least the usual text fixes have found their place in this update too!