Apple Pay Cash Rolling Out Now In The United States 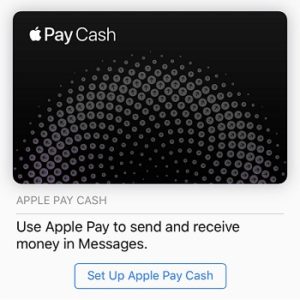 As anticipated, Apple has started to activate it’s much awaited person-to-person money transfer option within the Messages app. Apple Pay Cash has been announced back in May, during WWDC 2017, but has missed the iOS 11 release, as well as the iOS 11.1 update. It practically also missed the iOS 11.2 release, because the 2nd major iOS 11 iteration was pushed early in order to fix the nasty December 2 bug.

Apple Pay Cash is finally rolling out in the United States as we speak. The Cupertino-based tech company has started to bring its severs online. We’ve been informed that the service is live in certain parts of the U.S. and should be available nationwide in the upcoming hours. To be able to send money to your iOS contacts you have to set up Apple Pay Cash properly. To send money you have to open the Messages app and tap on the Apple Pay icon in the iMessage App Store section.

Tip: You can also send or request money from your friends and family with the help of Siri! Just wake your virtual assistant and voice command: “Send / Request [$ amount] to/from [contact name]!”

Fact: Apple Pay Cash will become available to the Apple Watch too along with the release of watchOS 4.2.

Related: Isn’t Apple Pay Cash not working for you? Learn how to troubleshoot it!