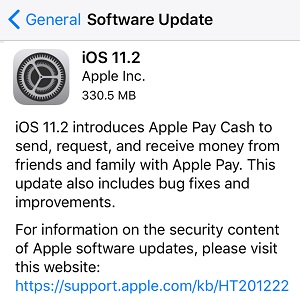 Yesterday, when the iOS 11.2 Beta 6 was rolled out, I predicted that we’re most likely dealing with a Golden Master version. I was right, but I would never have expected for Apple to push the official iOS 11.2 only a few hours later. Neither did the Cupertino-based tech giant, until a huge iOS 11 bug flared up in Australia. The glitch is December 2 related and causes all iPhones and iPads that run the 11th iOS generation to crash and respring when time-based local notifications are received after 12:15 AM December the second.

This annoying bug is caused by apps that provide daily or repeating local reminders. By local notifications we understand alerts generated on the iPhone or iPad from the app in question and not delivered remotely via Internet from a remote server that the app is using. To be more specific an example of an app that’s affected by the December 2 bug is Headspace, a software that reminds its user daily about the benefits of meditation.

How To Upgrade To iOS 11.2
Apple has quickly included a fix in the upcoming iOS 11.2 and released it early to prevent an avalanche of complaints. This is why we recommend you to install this software update as soon as possible:
1. Open Settings from your iOS Home screen and browse for General -> Software Update.
2. Allow your iPhone / iPad to retrieve iOS 11.2 and tap on Download and Install when ready.
3. Provide your Passcode and Agree with Apple’s terms.
4. Be patient until the new firmware is downloaded and deployed on your device. Your iPhone will reboot before the install concludes! Provide your Passcode when prompted and you’re back online!

iOS 11.2 New Features And Fixes
We’ve already created a collection with all new changes and bug fixes expected in this 2nd major iOS 11 update. The most important feature introduced is Apple Pay Cash. However, although iOS 11.2 is already live, the peer-to-peer iMessage payment option will be only activated remotely by Apple, next week. Remember that the service premiers in the United States only.
Other changes and improvements can be uncovered here!