Faulty iPhone X Out Of The Box? Bring It Back And Let EFFA Handle It! 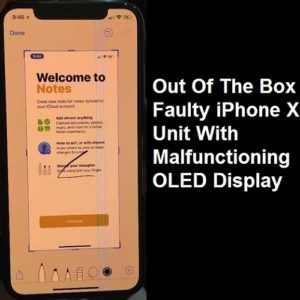 Apple is renown for its superior standards of quality. However, no matter how much attention they focus on shipping the greatest products to their consumers, perfection is very hard to attain. Out of the tens of millions of iPhone X units that are expected to be sold in the upcoming months, there will surly arise a few isolated incidents about iPhone Ten’s that malfunction out of the box.

In fact, only a day has passed since the launch of bezel-less iPhone and a Reddit user has already reported that his new unit has shipped with a faulty OLED display. Check the image available nearby to see the damage. More, we’ve also received an email inquiry from a fresh iPhone X owner that complained about a jamming Side Button that fails to work properly. If you’re an unlucky buyer don’t panic! Simply return the device to an Apple Store and it will be most likely be replaced.

These extremely rare incidents are handled by Apple’s EFFA (Early Field Failure Analysis) team which has the goal to pinpoint the source of the problem and prevent the fault from re-occurring in future units that are scheduled to be produced. If your iPhone is malfunctioning out of the box, Apple or the carrier you purchased it from has to replace it on the spot, without asking for an AppleCare+ insurance!

Fact: However, make sure that you’re honest when you bring in a new iPhone that has hardware issues. If the problem is not a manufacturing one and was caused by an impact or any other damage that could have resulted from your end, during unboxing or immediately after, Apple’s service staff will most likely detect it and refuse to replace your unit.

Don’t hesitate to inform us if your new iPhone X is an EFFA candidate. We’ll share your story!