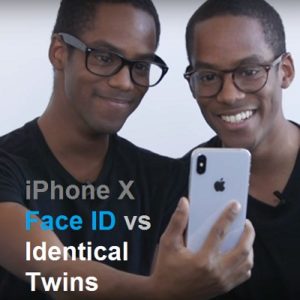 Face ID is the new authentication method chosen by Apple for unlocking the iPhone X. The revolutionary TrueDepth camera facial recognition system is also used for validating Apple Pay purchases, various passwords and other security related logins. It replaces Touch ID, mostly because of the removal of the Home button, to allow the iPhone ‘Ten’ to accommodate the edge-to-edge OLED display.

According to Apple, Face ID is the technology of the future and we expect that all upcoming iPhone models to switch for this facial authentication system. The TrueDepth camera is much more accurate than then fingerprint reader. Apple reported a 1:1,000,000 chances of another face being able to unlock the iPhone X, while Touch ID was accurate to 1:50,000 individuals. However, if you have an identical twin Face ID isn’t that secure anymore!

Fact: Did you know that you can tweak Face ID to unlock the iPhone X even when your eyes are closed?

Multiple videos of identical twins asked to test out Face ID have already hit YouTube and in the majority of cases the iPhone X facial recognition system FAILS to make the difference between two identical brothers or sisters. The only attempts when it can successfully identify the two identical siblings is when they aren’t 100% identical. I mean those cases when one of the two has a scar or has any other minor facial imperfection, which results from an accident or ageing. Check out the videos listed below and convince yourself.

iPhone X Face ID Tested With Twins
Mashable has invited two pairs of identical twins and asked them to test Face ID. Surprisingly, the iPhone X can’t make the difference as you can witness in the video embedded below:

Tech Insider has performed the same expirement. In this case the iPhone X manages to make a difference, however we can also notice difference between the two brothers with the naked eye. The twins aren’t 100% identical.

Fact: The good news is that Face ID can adapt to a man’s beard. It automatically adapts when you’re growing it and also detects when you shave it. You do have to insert your Passcode to confirm that’s you, but after that the iPhone X automatically remembers that you shaved.

Update: Another video shows an iPhone X that’s unlocked with Face ID by two different users that pass the device from one to the other. Is this machine learning or a True Depth camera system vulnerability?

Related: Also read about how to temporary disable Face ID and the 7 situations when Face ID is replaced by a Passcode requirement!