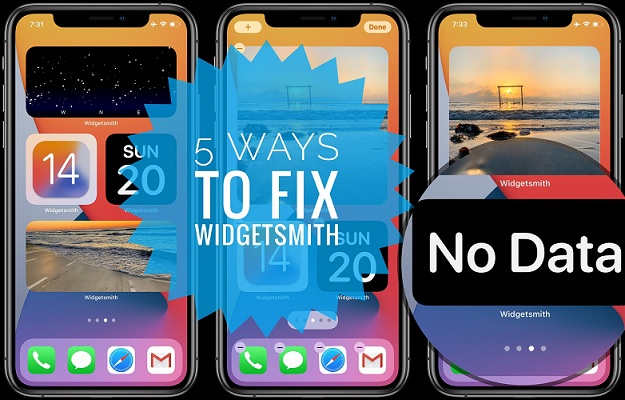 Home Screen widgets have become very popular since last week’s release of iOS 14. Widgetsmith is one of the most popular apps that provides custom widgets for iPhone and iPad.

Widgetsmith is practically a huge collection of widgets packed in a single app. You can choose from multiple widget types and all of them have their own styles, fonts, backgrounds and other edits, resulting in millions of possible layouts for your Home Screen.

However, because both Widgetsmith and iOS 14 are in their initially release stages, minor glitches often prevent widgets from working as expected. Users report Widgetsmith app to crash when launching, others complain about the glances displaying a grey background or a black one with the ‘No Data’ text.

Widgetsmith version 1.0.7 is now available with a fix the photo album grey screen bug. This update also fixes the annoying ‘No Data’ issue of the Activity widget.

Important: If all your widgets turn grey after updating to the latest version, don’t panic! Reboot your iPhone and the glances will return back to normal.

Check out our live Widgetsmith troubleshooting guide and learn how to fix the grey screen bug:

There isn’t a single fix for all these situations. In this article we’ll go trough the common Widgetsmith troubleshooting steps and hopefully we can pinpoint your issue.
Before we start, please make sure that your iPhone is running the official version of iOS 14 and not an outdated beta or pre-release version. Either that, or an earlier iOS 13.x will prevent Widgetsmith from working on your iPhone or iPad!

How To Troubleshoot Widgetsmith in iOS 14 and iPadOS 14

First, let’s go through the correct installation steps and make sure that you properly configure the app on your iPhone or iPad.

1. Widgetsmith Widget Not Showing Up?

A common problem reported by users is that Widgetsmith is not available in the iOS 14 Home Screen ‘Add Widget’ section. This issue can be caused by an iOS 14 glitch that requires third-party apps to be opened at least once, before their widgets start showing up in the ‘Add Widget’ list.
So, don’t hurry up to add Widgetsmith widget a soon as you download the app from the App Store (direct link).

Differently, from most third-party apps that provide Home Screen widgets, with Widgetsmith it isn’t enough just to open the app and then jump to adding it to the Home Screen as a widget. This will result in widgets displaying a grey screen.
You have to configure at least one Widgetsmith widget, before adding it.

How To: Open the app and you’ll be prompted with three default widgets sizes. Tap on one of them and select Default Widget. Scroll through the options menu and choose the type of your widget. You can pick from Time, Date, Custom (Photos, Photos in Album, Custom Text, Blank), Calendar, Reminders, Weather, Health & Activity, Tides and Astronomy.

As soon as you decide on the widget type, style and color, tap the Back button (top-left corner) to return to the widget page.
Tip: Tap ‘Small #1’ (or Medium #1, or Large #1) at the top of your page to rename your widget and better recognize it later. Hit ‘Save’ when you’re ready.

3. How To Grant Permissions For Widgetsmith

Widgetsmith, as any other app, requires your permission to access various data from your iPhone in order to be able to populate its widgets. If you don’t allow permissions the glances will display an annoying black screen along with a ‘No Data’ message, or the already mentioned frustrating grey screen.

How To: Permissions are granted as you attempt to add the specific widgets but you can double-check by tapping on the Settings tab and selecting Manage Permissions. ‘Status: Granted’ has to be displayed for Location, Health, Calendar, Reminders and Photos for the respective widgets to work.

4. How To Fix Activity Widget ‘No Data’ Bug

At the time of writing we managed to troubleshoot all glitches excepting the ‘No Data’ error that’s displayed when you add the Widgetsmith Activity widget to the Home Screen.
The Health permissions remain in the status ‘Requested’ state no matter what workaround we attempt to apply.

To fix the permission you can tap on ‘Manage’. This brings you to the stock iOS Health app. Tap on your ‘Profile icon’, in the top-right corner of the screen -> Tap on ‘Apps’ (available in the Privacy section) -> Select ‘Widgetsmith’ and make sure that all health data categories are turned ON!

If you’re still getting the ‘Status: Requested’ state, we’re most likely dealing with a bug that has to be fixed by the Widgetsmith app developer. We’ll update this article as soon as a software update becomes available in the App Store.

5. How To Fix Widgetsmith Black Screen

The widgets can also display a black screen. This often happens when you haven’t assigned content for it. For example, the Photos Album widget, requires you to assign an album fro the Photos app.
Tap on ‘Selected Album’ and pick an album that has at least one photo in it. If you pick an album with videos Widgetsmith won’t work.
Trick: Another useful tip is to create a ‘New Album’ in the Photos app. Open Photos -> tap on the Albums tab (bottom menu) -> Select the ‘+’ icon (top-left corner) -> New Album -> Enter a name for your new album (like ‘Photos for Widget smith’) -> Hit Save -> Populate the album with Photos.
Fact: Use this new album whenever you configure a Photos widget in Widgetsmith!

If Widgetsmith is still not working after applying all the fixes mentioned above, you can also try these more general debugging tips:

7. How To Fix Widgetsmith Reminders Widget

Are you adding a Reminders glance on your Home Screen but its doesn’t display any information? You linked your lists from the stock iOS 14 Reminders app and your still getting the gray screen? Apparently, current limitations prevent Widgetsmith from populating the reminders widget with multiple lists.
Fix: The workaround is to select a single list when configuration the Reminders widget in Widgetsmith.
How To: Widgetsmith -> Edit Widget -> Reminders -> Lists (If there are more lists available, select a single one).

8. Widgetsmith Worked But Not Anymore?

Your third-party widgets worked without a problem, but all of a sudden they’re grayed out? This can happen if you overdue it.
There is no known limit for how many Widgetsmith widgets you can add, but testing has shown that if you add too many they will ultimately crash.
Either a glitch or an iOS 14 limitation that caps the amount of resources that a third-party app widget can use prevents Widgetsmith from displaying the glances correctly after you add too many.
Fix: As soon as this happens, try to delete the most recent added widgets and reboot your iPhone. If the problem persists, I’m afraid that you have to delete Widgetsmith app and re-install it. This means that you have to reconfigure your widgets from scratch!

Update 2 (September 24, 2020)
The best way to fix Widgetsmith grey screen is to update to iOS 14.0.1, that promises to solve a glitch that was preventing images from displaying in widgets. Widgetsmith has also received a software bump. The change log of version 1.0.5 mentions a fix for the ‘grey box’ error!

Is Widgetsmith working on your iOS device? Did you find other helpful troubleshooting tips? Use the comments sections available below and share them with us!

Related: Check out this extended collection of more than 100 third-party apps that have update with support for iOS 14 and iPadOS 14 Home Screen widgets.