iOS 10.3.1 Rolls Out Without Notice To Patch Wi-Fi Security Vulnerability 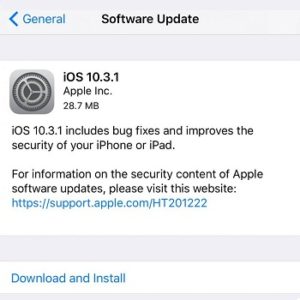 One week after the much expected release of iOS 10.3, Apple has rolled out a minor, but very important update labeled as iOS 10.3.1. This latest software update comes out of the blue. It didn’t have a beta version as a forerunner, which means that the Cupertino-based tech giant had to roll it out without prior planning.

Apple only acts like this when security is at stake and iOS 10.3.1 makes no exception. As usual, minor updates are accompanied by the standard update log, which states “includes bug fixes and improves the security of your iPhone and iPad”. This means that all changes are under the hood. However, if we analyze the security note of the release we can notice that it patches a Wi-Fi vulnerability that might have been exploited by an attacker, which when in range, could have “executed arbitrary code on the Wi-Fi chip”. 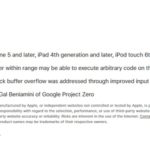 Security fixes are always very important, thus I recommend you to update as soon as possible to iOS 10.3.1. The easiest way to do it is over-the-air, especially if you’re already running iOS 10.3 on your iPhone or iPad.
Tap on Settings and browse for General -> Software Update. Allow your device to check for the new release and tap on Download and Install to start the procedure. Agree with Apple’s terms and be patient until the whole process completes.
Fact: iOS 10.3.1 comes as a small addition to iOS 10.3. It’s 28.7 MB large and installs quickly. If you’re on an older version you’ll have to expect a 1,75 GB large update and a longer than usual upgrade process, because your iPhone will get the new APFS file system installed on it. 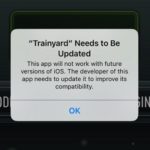 Update: iOS 10.3.1 also comes with support for the iPhone 5 and iPhone 5C devices, the only 32-bit processor smartphones developed by Apple which are able to run the 10th iOS generation. The Cupertino-based tech giant is planning to completely remove support for 32-bit apps and it seems that this switch will be implemented starting with iOS 11. As a final measure of information 32-bit apps are accompanied by a warning prompt, which informs both developer and user that the software is outdated and won’t work in future versions of iOS! The message has been first introduced with iOS 10.1 and has now been made even more explicit! It states:

This app will not work with future versions of iOS. The developer of this app needs to update it to improve its compatibility.