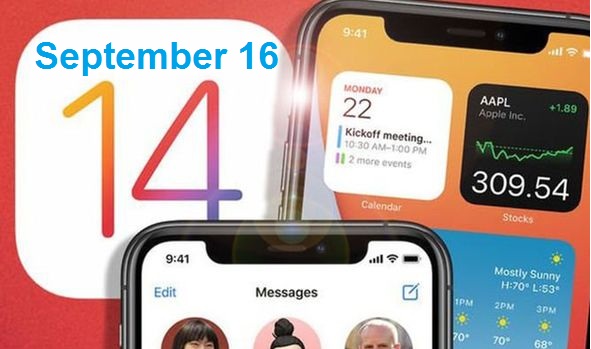 Apple has announced at the end of the ‘Time Flies’ September 15 keynote the release date for the much awaited iOS 14, iPadOS 14, watchOS 7 and tvOS 14. These four major software updates will be seeded, tomorrow, Wednesday, September 16.

Although we did not get any word about the upcoming iPhone 12 lineup, iOS 14 will be released to the general public and all compatible iPhones. iPadOS 14 comes alongside the new iPad 8th generation and the spectacular iPad Air. While watchOS 7 launches together with the unveiling of the Apple Watch Series 6.

If you’re iPhone is running iOS 13.7 or an earlier version you can update to iOS 14 over-the-air from the Settings app.
All that you have to do is:
1. Open Settings on your iPhone or iPad.
2. Tap on General.
3. Select Software Update.
4. Hit Download and Install.
5. Provide your Passcode, Agree with Apple’s terms and be patient until iOS 14 is downloaded and installed on your device.
Fact: This is a big software update, 4,79 GB in size. Downloading and updating to the 14th iOS generation will take a while. Make sure that you are connected to Wi-Fi and your iPhone has enough battery.
Tip: Check out the iOS 14 compatible iPhone models.

Watch how long it takes to update iPhone to iOS 14:

How To Update To watchOS 7

After you update your iPhone to iOS 14 you can also upgrade your Apple Watch to watchOS 7 as long as you own a compatible model.
1. Open the Watch app on the paired iPhone.
2. In the ‘My Watch’ tab, tap on General.
3. Select Software Update.
4. Tap on Download and Install.
5. Provide Passcode, Agree with terms and be patient until watchos 7 is downloaded and installed on your Apple Watch.
Tips: For the update process to work, you need to connect your Apple Watch to a charger and paired it to the companion iPhone.

Have you updated to iOS 14? What’s your feedback? Let us know, using the comments section available below.

Related: Check out 50 iOS 14 new features, as well as the most important enhancements in watchOS 7!