iPhone 8 Expected To Be Classified As IP68 Water Resistant 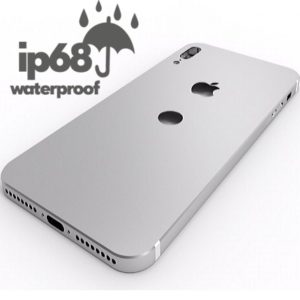 One feature that will most likely be upgraded in the 2017 iPhone will be the water resistance rating. As you might know, the iPhone 7 and iPhone 7 Plus devices are advertised as IP67 watertight. They’re the first iPhone generation that Apple promoted as being able to withstand to water, up to a certain degree, of course. However, the Cupertino-based tech company claims that water protection can wear out over time. It could be negatively influenced by drops and other shocks that an iPhone might suffer during its lifetime. This is why the iOS smartphones aren’t covered by warranty in case of liquid damage. Your cheapest get out of jail card when it comes to circuit flooding is the AppleCare+ unit replacement service, priced at $99 (added to the $129 base).

A while ago, I explained to you how to interpret the Ingress Protection scale rating, which shows that the iPhone 7 flagships can resist submerged underwater for up to 30 minutes to a depth of up to 1 meter. That’s for ideal conditions, when the unit isn’t worn out and not under the stress of additional factors (i.e. throwing or other actions that could emphasize the pressure of the water on its shell). Else, you have to continue to rely on water damage prevention tips.

iPhone 8 To Reach iP68
Considering that Apple’s main competitor, Samsung has manufactured the Galaxy S7 at IP68 standards and that the fresh launched S8 flagship has achieved the same rating, it’s rightful to expect the 2017 iPhone to match this water resistance rating:

1. OLED Display
The new, Samsung-manufactured screen is certainly a piece of hardware that will help the iPhone 8 reach IP 68, because its more malleable.
2. Revamped Receiver
Taking in account JP Morgan’s analysts, that follow Apple’s supply chain in Asia and Pacific, which claim that the iPhone 8 will receive an enhanced earpiece unit, with additional audio and waterproof features, we can safely agree that Apple is aiming for the superior water-tightness for its upcoming model.
3. Reinvented Touch ID
Last but not least, there is a frenzy of leaks and rumors that focus on the fingerprint sensor placement. With optimists expecting it to be embedded within the front-facing display, while pessimists anticipate it displaced, towards the back, below the Apple logo. There is also a middle option. Apple could embed it within an enlarged Power Button available on the right side of the device. No matter the location it’s certain that the sensors will be watertight. 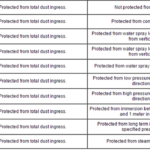 An Ingress Protection label of 8, when it comes to water resistance, means that the new iPhone will be able to defend himself from water intrusion, when submerged to a depth of 1.5 meters for 30 minutes. That’s 0.5 meters more than the clearance provided by IP 67 which can prove itself crucial in many water incidents that involve iPhones.
Dust protection remains to the level of 6, a maximum rating on the scale of 0 – 6, which confirms that the iOS device is dust tight.
Fact: The Ingress Protection scale for water resistance has a maximum rating of 9, a waterproofing level that hasn’t been achieved by any smartphone yet!