Posted in Reviews by Patricia on August 7, 2016 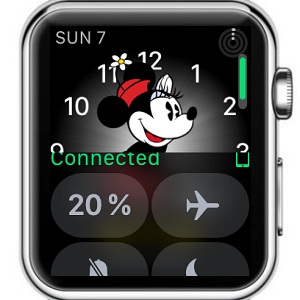 The 3rd watchOS generation is a major update to the Apple Watch operating system. It comes with a large list of new features as well as many changes and redesigned functionality for the existing ones. We previously shown you the new role of the wearable’s Side Button and the introduction of the Apple Watch Dock. Now, it’s time to take a look at the revamped Control Center!

As mentioned in our previous watchOS 3 Beta testing reviews, the Apple Watch Glances have gone missing in watchOS 3, they’ve been replaced by the Dock. Swiping up the AW display from the Watch Face still brings up the Control Center card. But it’s the only one left from the old Glance system. However, additional icons have been fitted in this panel to provide shortcuts for actions like: Battery Indicator, Airplane Mode, Silent Mode, Do Not Disturb, Ping iPhone, Lock Screen and AirPlay. 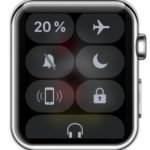 watchOS 3 Control Center Look
Check the print-screen available nearby and see how the new Apple Watch Control Center looks like. Shortcuts light up when they’re active and grey out if you tap them to disable their function.
It seems that Apple has chosen the right way and redesigned the wearable’s functionality to resemble more with the iPhone. The Dock is a similar feature to the iOS App Switcher, while the gadget’s Control Center panel includes almost the same features as the iOS 10 iPhone Controls card.

Apple Watch Control Center Function
Let’s take a look at all icons available in the watchOS 3 CC card and mention their functionality. 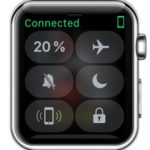 1. Connectivity Status: The green Connected label displayed at the top of the display shows that the wearable is in range with the paired iPhone. Else, a red Disconnected tag is shown.
2. Battery Percentage Indicator: has the role to keep you informed about the real time power charge remaining in your battery. Taping it opens up the former Battery glance, with the Power Reserve enable/disable option.
3. Airplane Mode: A toggle for switching Airplane Mode ON/OFF. The option kills all Apple Watch connectivity with the paired iPhone, Wi-Fi network and other devices.

4. Silent Mode: is a handy shortcut that quiets your wearable when enabled.
5. Do Not Disturb: sends your watchOS device in complete silence. No haptic or acoustic signal will be triggered when a notification reaches your wrist.
6. Ping iPhone: call for your iPhone in case you’re not finding it around your home. The Watch triggers a beeping sound in the paired iOS device. Feature doesn’t work when device is in Airplane Mode.
7. Lock Screen: locks your wearable when tapped. You need to type the Passcode to unlock.
8. AirPlay: allows you to mirror your wearable on a compatible device.