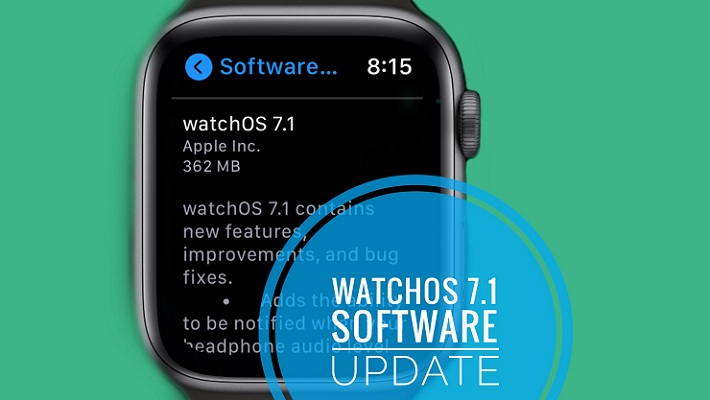 watchOS 7.1 update, build number 18R590, is now available for download! This is the first major software update for Apple Watch since the initial release of watchOS 7. Other minor releases including watchOS 7.0.1, 7.0.2 and 7.0.3 have been minor releases focusing only on bug fixes!

watchOS 7.1 brings warning for situations when headphone audio levels are too high and could negatively impact your hearing, and adds support for ECG app and irregular hearth rhythm in South Korea and Russia. Two important bug fixes are also included: a bug that was sometimes preventing users to unlock a Mac with the Apple Watch and the Apple Watch Series 6 dark screen problem.

How To Update To watchOS 7.1 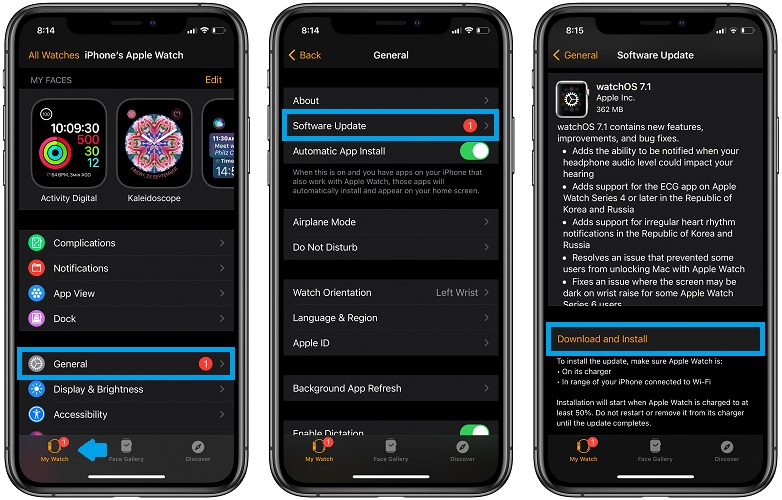 1. Open the Watch app on the paired iPhone
2. In the My Watch tab, browse for General -> Software Update.
3. Tap on Download and Install.
4. Provide iPhone Passcode, and be patient until watchOS 7.1 is downloaded and prepared for installation.
5. Tap Install when it becomes available. Next, the update is verified and deployed on your wrist-worn device.

How Long Does It Take To Update To watchOS 7.1

watchOS 7.1 is a medium-sized update. The file is around 362 MB large. The size varies a little depending on your Apple Watch model.
Update time is usually impacted by the two devices involved in this process. The newer the faster. We’ve updated An Apple Watch Series 6 connected to an iPhone 11 Pro and got the total update duration of 7 minutes.
You can check the time on the screenshots provided above:
An example shows a device started installing at 12:29 pm and the watchOS 7.1 update process was completed by 12:34 pm.

If your smartwatch is still running the older watchOS generation, updating to watchOS 7.1 requires the same steps provided above. However, the update file will be much larger and this directly impacts the duration of the update. Expect a total time of up to: (45 minutes).
Fact: The total update time is strongly impacted by the speed of your Wi-Fi connectivity.
Tips: To make sure that the update process is flawless you have to make sure that your watch’s battery percentage is over 50% and the device is connected to its MagSafe charger!

Do you encounter any problems like Apple Watch failing to verify the update because the device isn’t connected to the Internet? Try to unpair and re-pair your device and see if it helps! More details available here (in the ‘Restore Apple Watch’ section)
In case of other watchOS 7 updating problems don’t hesitate to comment this article and ask for help!

Other common watchOS 7 bugs are:
– inaccurate Stand hour reports
– Force Touch missing (this feature has been actually removed by Apple on purpose, but many users are still hopping that it will be added back).
– higher than normal battery drain
– Apple Watch not ringing (randomly muted).

Have you updated to watchOS 7.1? What’s your feedback? Do you need any help? Use the comments section available below!