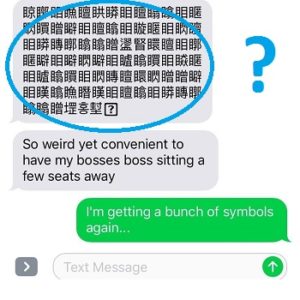 If you’re an AT&T customer don’t be surprised if you start receiving texts filled up with Chinese symbols. I’m not talking here about the already famous Chinese iMessage phishing scam that tricks you to expose your Apple ID credentials and then speculates the security breach, to spam your iOS contacts with texts that promote Asiatic gambling sites.

The AT&T issue is a carrier related glitch, that affects both iPhone owners as well as other smartphone users. More, the Chinese characters appear in regular text messages and not in Apple’s trademark iMessage environment. It seems that there is a flaw on the AT&T side that prevents proper message encoding. Is there something that you can do about it? Yes, read on and see how you can get around this error until the Dallas-based Telecommunications giant manages to fix it.

Update: The Chinese symbols encoding issue has been acknowledged by AT&T and they are currently looking for a solution. It’s confirmed that both iOS and Android users are affected by it! Keep in touch as we will update this article as soon as a fix becomes available. Until then check the tips provided below to try to solve the problem on your own.

Tips To Get Around The ATT Chinese Messages Flaw

1. Use iMessage System
If you and your discussion partner are both using iOS devices, you can only get hit by the Chinese issue if you’re not sending texts via the stock iMessage system. If the text bubbles are green it means that either you or ythe sender don’t have Internet connectivity, or the iMEssage feature is disabled on one or both devices.
Check these two aspects and switch to Apple’s messaging platform to get around the AT&T problem. 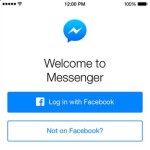 2. Switch To Cross-Platform Messaging Apps
As mentioned above this is a carrier related issue, which means that you can temporarily change the communication channel. Chat via popular messaging apps like Whatsapp, Facebook Messenger, Viber or anything else that you and your contacts use. When you receive a text that is made up by Chinese letters, ask your chat partner to resend the message via one of the third party messaging apps that I mentioned above.
Fact: The only downside for this fix is that both of you need Internet connectivity on your smartphones.

3. Adjust Message Structure
Based on reports from our readers it seems that the AT&T bug is more likely to occur when the sender dispatches long texts or uses Emojis and punctuation signs. So, if you receive Chinese language message send a brief reply to your chat partner and ask him to resend a shortened version of the message and exclude smileys and excessive punctuation.

4. Decode Chinese Symbols
Last but not least you can try to fix what AT&T does wrong and decode the Chinese character array on your own. You can translate the Asiatic character message into UTF-8 (Unicode Transformation Format). The “8” stands for the 8-bit blocks that are used to define a character. Test your luck with Google Translate.