Apple has just seeded the second beta of iOS 10.1 firmware for both Developers and Public Beta testers. This means that everyone can install and test out the next important iOS update, before the software is released to the general public. Read on to find out what’s new and figure out if the changes are important enough for you to jump the gun and grab iOS 10.1 before its official release.

Beta 1 introduced the highly commented an mostly appreciated Portrait Mode for iPhone 7 Plus owners. iOS 10.1 Beta 2 focuses, besides the regular bug fixes, on a few Messages app changes and new features that include the ability to Replay text effects, a new Auto-play Message Effects setting, as well as better iMessage App Drawer management. 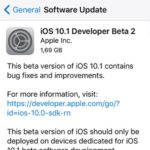 Important: Perform a full iPhone backup via iTunes before proceeding!
1. The easiest way of grabbing this latest test version is by signing up for the Apple Beta Software Program.
2. If you’re already a member log-in and download the iOS 10 Beta Software Profile.
3. Open Settings on your iPhone and go to General -> Software Update.
4. Download and Install iOS 10.1 Beta 2, over-the-air, as you do with every regular software update.

3 iOS 10.1 Beta 2 Changes & Features
1. Messages Replay Button
Now you’re able to replay an effect included by the sender in its message. A blue Replay button is available just below the text bubble. Tap it and the animation will play one more time allowing you to re-live the moment and share it with someone else available nearby. 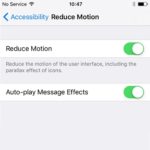 2. Auto-play Message Effects
A lot of iPhone users where not able to enjoy the iOS 10 Messages special effects because the feature did not work if the Reduce Motion setting was enabled on the device. A new setting called Auto-play Message Effects has now been added to this Accessibility setting that allows invisible texts, and animated backgrounds to unfold even if Reduce Motion is up and running.

3. Revamped iMessage App Drawer
iOS 10 comes with a dedicated App Store section for iMessages. The new App Drawer in the built-in Messages app was getting overcrowded in case many applications where installed on the device. It’s functionality has been redesigned so that switching from one app to the other doesn’t cause scroll bar overlays anymore.