Another great new addition to the most popular smartwatch available on the market is the Flashlight feature. Thanks to the upcoming, 4th watchOS generation, Apple’s wrist-worn gadget gets native support for this functionality. I’m sure that you’re often using the iPhone’s Flashlight button, available in the iOS Control Center, to turn on the flash available on the backside of your smartphone and light-up your surroundings whenever needed.

Starting with watchOS 4 you have another light source nearby. Yes, it’s true the Apple Watch isn’t equipped with flash hardware, but you can use its display as a light source and believe me it really makes a difference when everything around you is pitch-black. The new Flashlight feature allows you to turn your wrist gadget’s display at maximum brightness and find your way through darkness!

How To Turn On Apple Watch Flashlight 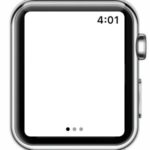 Assuming that your smartwatch is running watchOS 4 or later (currently the 1st Developer Beta is available) proceed as follows to enable Flashlight mode:
1. Raise your wrist to wake your Apple Watch.
2. Swipe up from the bottom of the screen to unveil the Control Center.
3. Tap the Flashlight icon.
4. Point your Apple Watch in the desired direction to exit the Flashlight selection menu and turn on the light at maximum intensity.
Fact: You can also tap the screen once, after you open the Flashlight app to hide the slider and bring your screen’s white background to maximum brightness.

How To Disable Apple Watch Flashlight
To turn the light off, simply press the gadget’s Digital Crown or Side Button and the screen will return to the Watch Face view.
Fact: Control Center isn’t available while the Flashlight is active, which means that you can use the same icon to disable it. 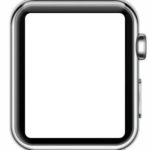 Differently, from the iOS Flashlight the new watchOS beacon comes with three operating modes.
A. Traditional Flashlight
The default one is the one already described above, that displays a white full-screen background with maximum brightness intensity. Do note, that in watchOS 4, there is no Flashlight brightness setting, similar to the one that you find on the iPhone, mostly because the Watch isn’t equipped with an actual flash. 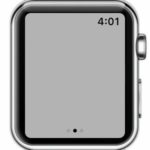 To access the other two lightning modes you have to swipe-left on the Flashlight’s app home screen:
B. Strobe Flashlight
This lightning options is available on the second Flashlight card and provides a blinking flashlight. It’s helpful when you jog during the night and want to make your presence noticed for incoming traffic. The intermittent light is easier to spot from a distance, when compared to one that is always on. 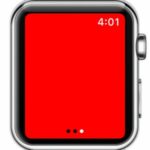 C. Red Flashlight
If you need even better signalization you can slide-left one more time to reach the 3rd Flashlight mode, which turns your Apple Watch’s screen red. This is especially useful when you try to maximize your visibility for traffic approaching from behind.

Hint: You might be also interested about how to enable the paired iPhone’s flashlight from your Apple Watch!