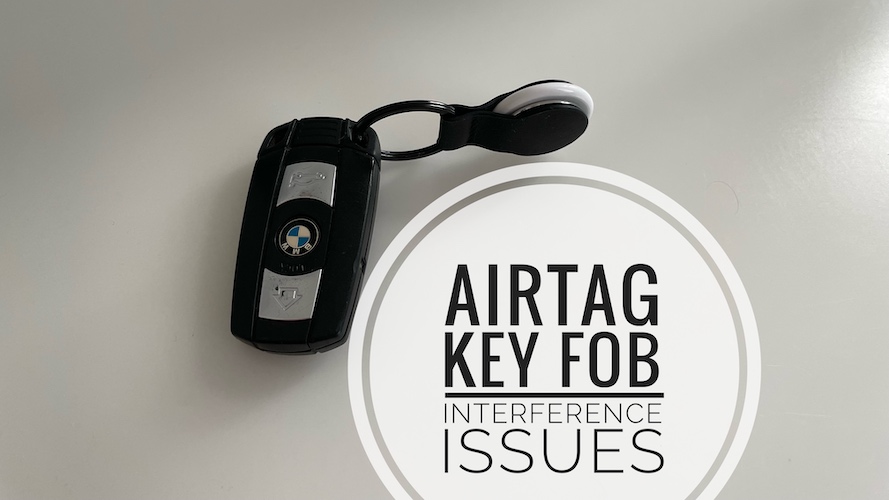 Is your car key fob glitching ever since you attached an AirTag to it? Unfortunately, this isn’t uncommon. I could replicate the issue with my own fob and also found various reports of AirTag key fob issues on Apple’s support forums. Apparently, the Apple AirTag is able to cause interference in the communication of a car and its key fob.

Some car keys are more affected than others. That’s because it all depends on the frequency used by the fob when it communicates with the vehicle. If it’s in the same spectrum with the AirTag antenna your car key might not be detected by the car.

In other cases it just weakness the signal and the owner has to move really close to the car for the fob to be detected and its functions to work normally.

Modern key fobs that malfunction because of AirTags, aren’t recognized and force owners to start their vehicles the old fashioned way, by inserting the key inside the contact socket.

Owners with older fobs will have a hard time in locking and unlocking a car because of the same AirTag interference that messes up the communication between the two.

Not sure if Apple will able to fix this issue in an upcoming firmware update, but until then, here is what you can do to troubleshoot AirTags that mess up key fobs:

1. Use An AirTag Keychain That Allows Distancing

After a series of tests I can conclude that the interference mostly happens when the AirTag is literally ‘glued’ to the key fob. The problems go away as soon as the two separate for at least a couple of centimeters.

Fix: Use an AirTag keychain that is small enough not to allow the key to fully bend over the AirTag, or a lanyard that’s long enough to ensure a comfortable distance between the fob and Apple’s Bluetooth tracker.

Practically, you have to prevent the AirTag and the key fob from overlapping one on top of the other. 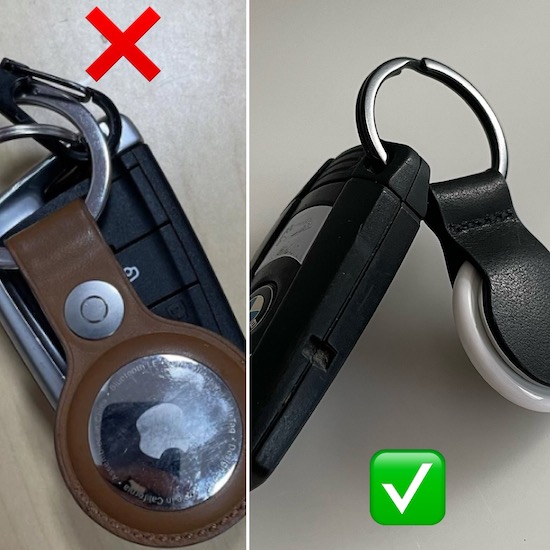 Another way of helping your car and fob to communicate when an AirTag is around, is to decrease the distance between the two devices. If you’re not able to unlock your car from 10 meters away, you should move closer, right next to the door, and the communication should to be restored.

The AirTag Bluetooth connectivity uses the 2.45 GHz frequency, while car key fobs should be around 315 MHz (North American cars) and 433.92 MHz (for European cars) according to Wikipedia.

So, you can either ditch the AirTag and buy a Tile to continue to keep track of your car keys! Or, change your car to get a fob from a brand that’s less sensible to AirTag interferences (joking!).

I’ve seen reports of affected fobs from manufacturers like Toyota, BMW, Mercedes, Subaru and the list goes on.

Fact: Not all models from these brands are affected.

Is your key fob also jammed by the AirTag? Did you find a better fix? Use the comments section and share your feedback. Don’t hesitate to mention brand and model as we try to survey which cars are prone to this issue!

Related: How to replace AirTag battery!