How To Install watchOS 7 Public Beta On Apple Watch 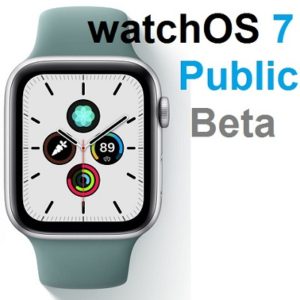 Similar to iOS 14 and macOS Big Sur, watchOS 7 is also currently beta tested and fine tuned for the public release scheduled for this fall.
The novelty though is that Apple has released, for the first time ever, a public beta for an upcoming watchOS release.
This means that anyone can download and install watchOS 7 Public Beta on Apple Watch as long as you own a watchOS 7 compatible model.

Installing watchOS 7 Public Beta allows you instant access to some important new features like sleep tracking, automatic handwashing, new watch faces, watch face sharing, more workout types and others.
Be aware that as any other test software version the watchOS 7 beta comes with a fair share of bugs and glitches. The upcoming Apple Watch OS isn’t fine tuned yet which leads to faster battery drain as well as other inconveniences.

How To Install watchOS 7 Public Beta

Fact: To be able to download watchOS 7 Public Beta on Apple Watch you need to run an iOS 14 Beta version on the paired iPhone. Tap here for a detailed step-by-step tutorial on how to install the latest iOS 14 Public Beta on your iPhone.
Important: Check the side effects listed at the end of this article before deciding to update to watchOS 7 Public Beta.
If you already run the 14th iOS generation on the companion device proceed as follows: 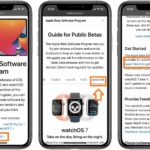 1. Tap here to open Apple’s official Beta Software Program website, in a new tab.
2. Sign In if you’re already a member or Sign Up with your Apple ID.
3. In the ‘Guide for Public Betas’ section, select watchOS.
4. Scroll for the ‘Get Started’ section and tap on enroll your Apple Watch.
5. Next, scroll for ‘Install the watchOS 7 Beta Software Profile’ and tap on the Download profile button.
6. Tap on Allow to confirm the download.
Tip: Apple Watch has to be paired with the iPhone, before you proceed to the next step. 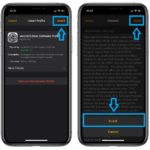 7. Tap Install, available in the top-right corner of the screen, to grab the watchOS Beta Software Profile.
Provide your iPhone’s passcode and agree with Apple’s Terms (tap ‘Install’ again).
Finally, hit Install one more time and the watchOS 7 configuration profile will be downloaded and installed on your iPhone.
Tip: Tap Restart to allow your iPhone to reboot and save the new profile settings. 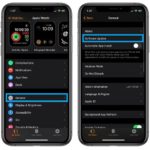 8. Open the (Apple) Watch app on your iPhone.
9. In the ‘My Watch’ tab, tap on General.
10. Select Software Update.
11. The watchOS 7 Public Beta should display on the software update screen. Connect your Apple Watch with its charger and tap on Download and Install.
12. Provide your iPhone’s passcode, agree with Apple’s Terms and be patient until the new public watchOS 7 test version is downloaded and deployed on your wrist-worn device.

13. Tap Install Now as soon as the download and preparations are completed. Be patient until watchOS 7 Beta is installed. The Apple Watch will automatically reboot to mark the end of the upgrade process.

Updating to watchOS 7 brings some inconveniences, along with the above mentioned new features:
1. No Force Touch – The sensitive press also known as 3D Touch on iPhone is completely disabled in watchOS 7, for all compatible Apple Watches. You can still long-press various areas and icons for hidden functions or menus, but the experience won’t be as immersive.

2. No Way To Back Out – In case that you’re not satisfied by the performance of the watchOS 7 Public Beta you have no option to downgrade to watchOS 6. This means that you have to stick to the test version until the public release scheduled for this fall.
Fact: There is an unpopular and timewasting workaround. You can mail-in your Apple Watch to an Apple Store and ask the Genius bar to install the latest watchOS 6 version back on your Apple Watch.

3. Battery Draining & Performance Issues – Last but not least we experienced accelerated battery draining in every watchOS 7 beta test version issues so far. The watchOS 7 betas are fairly stable but they’re not fine tuned yet. Don’t be surprised if apps crash out of the blue.

Have you managed to install watchOS 7 Public Beta on Apple Watch? Let us know, with the help of the comments section available below.