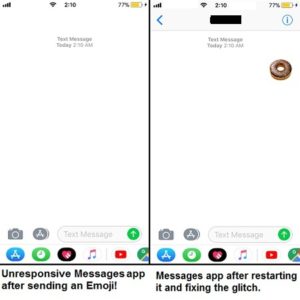 Is the Messages app becoming unresponsive if you start a new conversation with an emoji? Rest assured that you’re not the only iPhone and iPad user plagued by this problem. This is a generalized glitch that affects all Apple devices that run iOS 11.1.2 or newer. Although the Cupertino-based tech company has already released iOS 11.2 and recently iOS 11.2.1 the bug is still occurring.

Apple has either played down the annoyance caused by this glitch or was simply unaware of it. We’ve managed to reproduce the problem even on devices running the iOS 11.2.5 beta, which was seeded yesterday. This means that a software fix for this emoji-related bug that cripples the Messages app isn’t ready yet. Read on and find out what you have to do in order to temporary solve this issue.

How To Temporarily Fix The Emoji Bug
Until Apple decides to include a fix in an upcoming software update, here is how you can debug the Messages app:
How To: Force close Messages, from the App Switcher menu! Double-click the Home button to access the Multitasking menu, or use the 3D Touch gesture, or the new swipe gestures if you own the iPhone X. After quitting the app, reopen it, by tapping the Messages icon available on the Home screen!

Tip: Avoid starting a new Messages conversation with an emoji icon, if you don’t want to render the Messages app unusable again!

Fact: We’ll update this article as soon as Apple decides to release a permanent software fix for this glitch!

Related: iOS 11 brings a lot of new features and changes to your iPhone and iPad. Nevertheless, it’s also one of the must unstable versions ever released. Some of the most popular bugs are:
– the Keyboard autocorrect glitches;
– the Camera autofocus issue;
– the iPhone X touch screen problems in cold weather;
– the December 2 Date bug; and others.