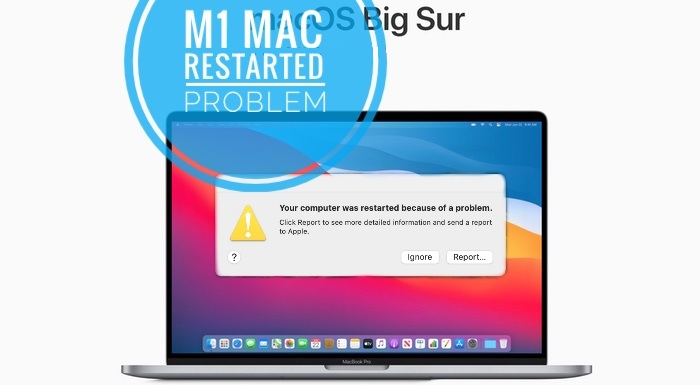 ‘Your computer was restarted because of a problem’ Big Sur popup!

Is your brand new M1 Mac not shutting down correctly? Is it briefly displaying a pink screen before it turns off? Are you prompted with the ‘Your Computer Was Restarted Because Of A Problem’ popup whenever you reboot or power off your machine? You can either Ignore or Report… the issue, but the error reoccurs after every restart!

This macOS Big Sur dialog box is displayed whenever your MacBook isn’t able to shutdown properly. A software glitch prevents it from signing off normally and the error is displayed after each reboot. To fix this glitch you have to find out what software is causing it and remove or reinstall it.

How to Fix M1 Mac Restarted Because Of A Problem

Because macOS Big Sur is a new release, some third-party apps might have failed to update or adjust to new requirements. This could generate errors!

An app that currently triggers in-correct shutdowns is Karabiner-Elements. The popular keyboard customization tool for your Mac is marketed as being compatible with Big Sur on its website. Both Intel-based Macs as well as Apple Silicone Macs support is mentioned. However, the software seems to conflict with macOS 11.0.1 on M1 MacBook machines!

How To: Open Karbiner-Elements Preferences and click on Misc in the top header. Use the built-in uninstaller to remove the software from your mac!

All that you have to do is to uninstall Karabiner from your M1 MacBook Pro and the ‘Your Computer Was Restarted Because Of A Problem’ prompt will stop appearing after each reboot. As soon as I installed the software back the error started to play out again.

If you’re also using keyboard customization apps and are encountering the your computer was restarted error, you should remove them and this will most likely troubleshoot it.

Are you also prompted with the ‘Your Computer Was Restarted Because Of A Problem’ popup? Have you found the software that’s causing the problem? Use the comments section and share it with us. We will update it in the main content of the article to make troubleshooting easier for everyone else.