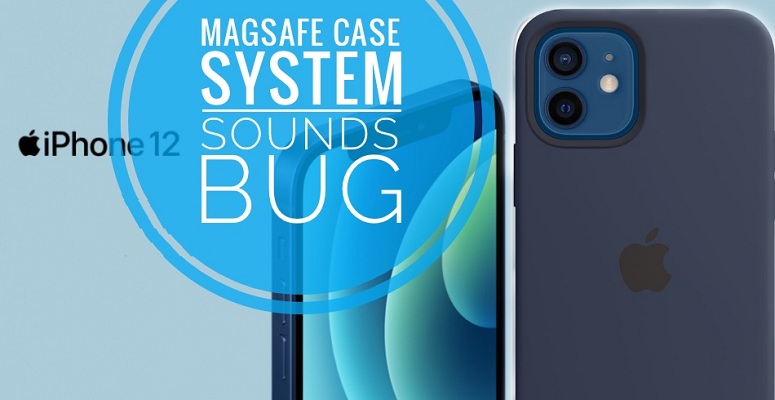 iPhone 12 & 12 Pro users complain about an annoying MagSafe case bug that tampers with system sounds such as Lock Screen and Keyboard clicks audio. These system sounds start playing weird every time after the new device is charged with the new wireless MagSafe charger and the magnetic case is on.

A working fix requires you to reboot your iPhone. but this troubleshooting method is only temporary because the bug will return as soon as you connect your iPhone 12 to the magnetic charger again.
Fact: The MagSafe animation plays out normally as well as all other audio on the device. Is just the system sounds that seem affected!

To force restart your device preform the following steps:

Most likely this bug has to be solved by Apple in an upcoming software update. Until then, if the problem is too annoying for you, just take off the MagSafe case and use a regular one.
In fact, we’re not sure if this is a bug or Apple is trying some MagSafe accessory exclusive sounds and they just messed up with the acoustic in the initial release. However, the general consensus is that the altered sounds caused by the MagSafe case aren’t an improvement to the traditional ones.

A third troubleshooting step that you could apply is update to the upcoming iOS 14.2 release by downloading the Public beta on your iPhone 12 or 12 Pro. However, this is time consuming and doesn’t guarantee a fix. A step-by-step guide about how to do it is available here.

We’ve been tipped about this issue, by Adam W. via our bug report page. He mentions:

“I have the 12 pro and the lock sound sounds weird when the magsafe case is on. It’s almost like it’s shortened and more tinny sounding. As soon as I remove the case the sound returns to normal.
Audio playback is fine otherwise, but for some reason the magsafe case is doing something to the system sounds”

We’ve also found a series of similar cases around the web. A different user, on Reddit claims that the Lock Screen sound on his iPHone 12 sounds twice as loud, while an other confirms that the system sounds glitch after every charge that involves the MagSafe charger.

Are you faced with the same issue. Is your new iPhone 12 sounding awkward when using a MagSafe case? Use the comments section available below and let us know.