Apple has announced, during WWDC 2015, that the 2nd watchOS generation coded for its wrist-worn device, is looming at the horizon and will most probably be released this fall. Nevertheless, beta test versions have been constantly updated, ever since and will continue to be issued until the general release. Contrary to the upcoming iOS 9 edition, that features a public beta version, and is accessible to anyone willing to try out the new iPhone and iPad OS, watchOS 2 betas are only available to those users owning an Apple developer account.

This doesn’t mean though that you can’t install watchOS 2 betas on your Apple Watch. You can apply anytime for a developer account and pay the yearly $99 fee. More, there are also a few tricks that will help you bypass the ownership of app coding credentials. WatchOS 2 does comes with a series of important updates like: third party complications, new Watch Faces (Timelapse and Photo Album), nightstand mode, time travel feature and many more. However, you do have to take in account that as it’s the case with all beta versions, various glitches and bugs are also included.

How To Downgrade watchOS 2 Developers Beta 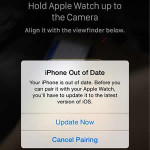 Before starting to install this beta, please carefully consider your options. You have to know from the get go that there’s currently no way back to the public watchOS 1 version, once you decide to upgrade to watchOS 2 Developers beta. The only solution would be to bring your Watch to an Apple offline store and have it downgraded by the Genius bar. Else, you have to stick with the betas until the public release of watchOS 2. The positives are that you get to be among the first to test out all new features, but will also have to support the downsides of faster battery drainage, crashing apps and the rest of the flaws wrapped around a beta release.

Fact: The watchOS 2 beta series has reached version 5, which is a far better optimized release, compared to the initial versions. This means that bugs and issues are less frequent .

How To Install watchOS 2 Beta 5 on Apple Watch 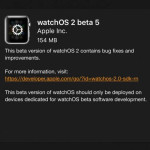 If you consider that the pros outweigh the cons, follow the steps listed below to successfully install watchOS 2 beta on your wearable.
Important: Make sure that all devices involved in this process are connected to power sources or have battery levels above 60%!
Step 1: Connect iPhone with computer and perform an iTunes backup.
Step 2: Unpair Apple Watch from its iOS companion. The easiest way is to do it from your wrist by browsing Settings -> General -> Reset -> Erase All Data and content. The backup you previously made will also include your wrist gadget’s data.
Step 3: Install iOS 9 Public Beta on the iPhone that you intend to pair the Apple Watch with. This is mandatory! You can’t run watchOS 2 beta on Apple Watch, without it.
Step 4: After installing iOS 9 you have to pair your Apple Watch to the updated iPhone.
Step 5: Download the latest watchOS 2 beta configuration profile on your iPhone. Click here and you’ll be redirected to the official Apple developer page.
Step 6: Use your Apple developer credentials (created during Step 3, unless you already had an Apple developer account) and pick Apple Watch as the target of the watchOS beta package. Reboot your iPhone when required.
Step 7: Open the Apple Watch app on your iOS device, make sure that you’re on the My Watch tab and browse to General -> Software Update. If prompted, enter your passcode and start the update. Be patient because in a few minutes you’ll have watchOS 2 beta running on your wrist gadget!