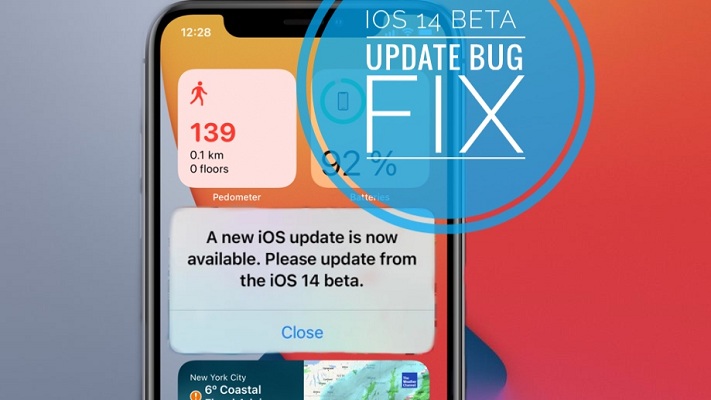 Is your iPhone displaying the ‘A New iOS Update Is Now Available’ popup, but there’s no actual software update available? This bug has recently flared up on devices running the iOS 14 beta version, more exactly iOS 14.2 Beta. The problem is really annoying because the dialog box shows up repeatedly asking users to ‘update from the iOS 14 beta’.

You can tap Close to dismiss the dialog box, but the message will repeat itself every time you unlock your device, seriously compromising your iPhone experience. This issue isn’t new, as it was reported in the past too, but since a couple of hours it accentuated and we received numerous complaints via our bug report page.

What triggers the ‘A New iOS Update Is Now Available’ Bug?

It appears that the iOS 14 Beta comes with a preset date until when the software should be updated by and that date has now exceeded, triggering the annoying warning message.
The ‘A New iOS Update Is Now Available’ problem isn’t new. It first came up during iOS 12 beta testing, and the situation got so complicated that Apple had to push an emergency software update add an odd hour (late night) to stop the popup from appearing.

Updated (October 30)
Apple has rushed an iOS 14.2 software update for Developers and Public Beta tester that fixes the issue!
Important: You need the iOS 14 Beta Profile on your device to install the new beta! If you previously removed the profile in order to fix the ‘A New iOS Update Is Now Available’ notification, you have to download it again! You can find all details here!
How To: With the iOS 14 Configuration profile installed, browse for Settings -> General -> Software Update and tap on Download and Install, on the iOS 14.2 GM software update screen!

Apple has released the official fix, as detailed above. Below you can find the temporary solutions. We do recommend you to go for the permanent fix to prevent the annoying notification from bothering you:

A temporary working fix requires you to push back the date on your iPhone. This will eliminate the triggering reason thus prevent the ‘A New iOS Update Is Now Available’ popup from showing up:

How To: Browse for Settings -> General -> Date & Time. Disable ‘Set Automatically’ and manually adjust the date of your iPhone to October 28 or earlier.
Important: Although this works, changing the date on your iPhone will mess up with other Date & Time related actions like Reminders, Alarms and more. Be careful!

The easiest way to leave the iOS 14 Beta program and return to the current version is to delete the iOS 14 Configuration Profile in Settings -> General -> Profile. Tap on the iOS 14 Profile and use the Remove Profile option.

Restart your iPhone and check for Apple’s software update that fixes this bug in: Settings -> General -> Software Update.
Important: At the time of writing there is no software update available yet. As soon as one is released we will update this article!

If you don’t want to wait for a new software update that allows you to easily leave the iOS 14.2 Beta. You can also downgrade to the current iOS 14.1 version. However, this will cause data loss, because you can’t restore from an iOS backup that’s done on a higher software version. This means that you can’t back up iPhone in iOS 14.2 beta and restore it in iOS 14.1 from the same backup.
If you have an older backup, done in iOS 14.1 or prior, you can use it but you will lose the data accumulated while on iOS 14.2.
How To:

Did you manage to fix the ‘A New iOS Update Is Now Available’ bug? What option have you applied? Let us know using the comments section available below. Don’t hesitate to mention a different solution if we missed out on something.