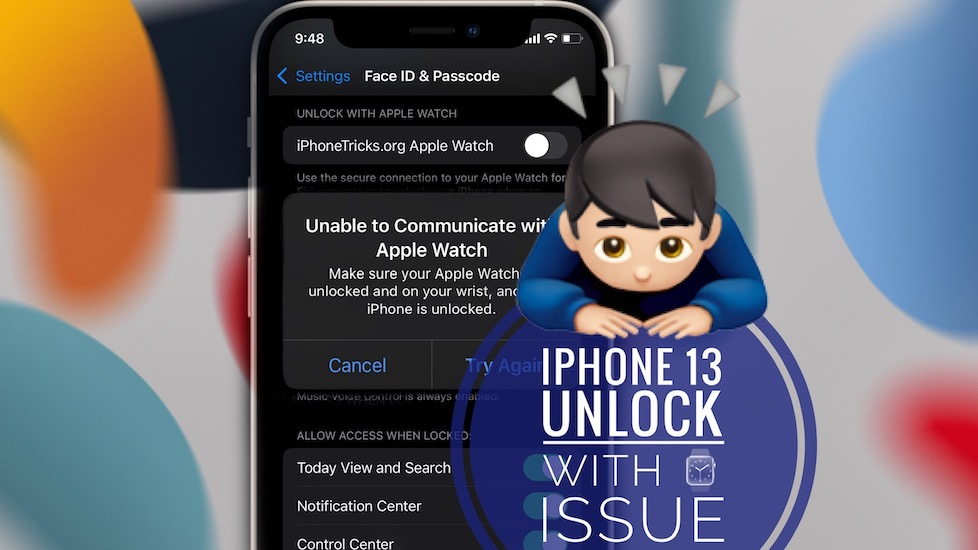 Is your brand new iPhone 13 prompting you with the ‘Unable to Communicate with Apple Watch’ error when trying to enable the Unlock with Apple Watch feature to make iPhone unlocking easy while wearing a mask?

Does the popup ask you to wear the unlocked Apple Watch and unlock iPhone to fix the issue, but you’re already doing it?

This looks like a spread out issue affecting all iPhone 13 models including the mini, Pro and Pro Max versions, as confirmed by this Reddit thread.

Apparently the 2021 iPhone are failing to generate their unlock keys, which causes the Apple Watch to reject the unlock setup request, as confirmed by the nearby screenshot.

Fact: Strange enough, the other way around, which is unlocking Apple Watch with iPhone 13 works!

How To Fix iPhone 13 Unable To Communicate With Apple Watch 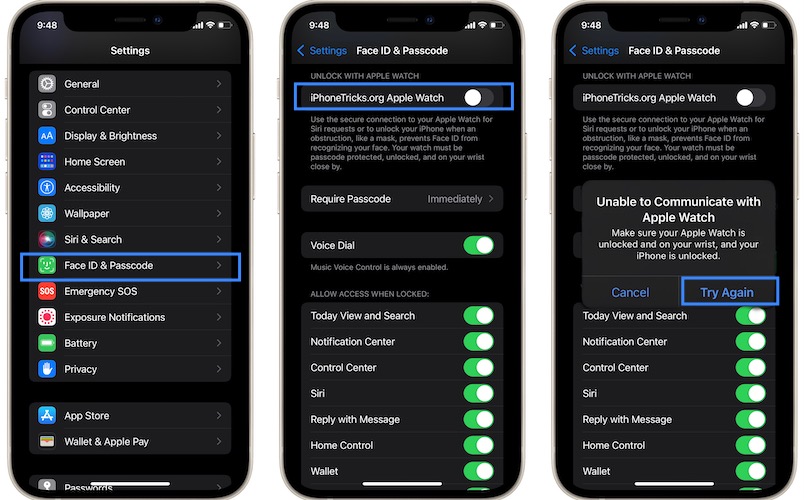 Going for Try Again will result in the same Unable to Communicate error, and you eventually have to settle with Cancel to clear the prompt.

Perform this troubleshooting steps to try and fix the Unlock with Apple Watch bug:

Early iPhone 13 adopters have confirmed that an iOS 15 Software Update is available out of the box for the brand new iPhones. Install it over-the-air in Settings -> General -> Software Update.

Another fix requires you to restart both devices. A fresh boot could clear minor glitches that could prevent iPhone and Watch from communicating properly and completing the Unlock with Apple Watch setup process!

The next step is to reset the watchOS 8 device and pair it back:

This bug has been patched in the 2nd test version of iOS 15.1. It will be released for public beta testers soon.
All that you will have to do is, update your device to iOS 15.1 Beta 2 to fix ‘Unable to communicate with Apple Watch’ error!

Fact: iOS 15.1 is only expected in October, it’s still in its early beta testing stages. However, this fix could be added to a minor update due anytime now.

We’re still expecting Apple to release a minor iOS 15.0.1 software update with a serioes of hot-fixes for the most common day one iOS 15 bugs! Follow us and you will be among the first to find out!

Update: Apple officially acknowledges this bug and confirms that a fix for the Unable to Communicate with Apple Watch error will be included in an upcoming software update! We will update you as soon as it becomes available. Bookmark and follow us on social media!

Workaround: A less ideal workaround that you can apply is to remove the iPhone Passcode requirement while you go out shopping and have to wear a mask!

Have you managed to configure your Apple Watch to unlock iPhone while wearing a mask? Did any of the above fixes help? Do you have a better solution? Use the comments section to share your feedback. Also please mention the iPhone 13 and Apple Watch models that you’re reporting about!